In recent years there has been significant interest in the development of high strength steels for use in a range of industrial sectors. For example, in the automotive industry the use of higher strength steels enables the use of thinner sections in structural components, resulting in a reduction in the weight of a vehicle and improved fuel efficiency. A major barrier to the use of high strength steels, however, is their susceptibility to hydrogen embrittlement, i.e. they can experience a significant drop in strength and ductility on exposure to hydrogen, either generated during manufacture or produced as a result of corrosive processes on the surface of the component in service.

The problem of hydrogen embrittlement has been known for over a century, but there is still a lack of understanding of the major mechanisms of embrittlement. This limits our ability to design new steels that are resistant to hydrogen attack. A range of mechanisms have been proposed in the literature. The two that have received the most attention are Hydrogen Enhanced Decohesion (HEDE) and Hydrogen Enhanced Localised Plasticity (HELP).

In this talk I will start by describing a major research initiative in the UK involving 6 Universities that was initiated to provide an in-depth understanding of the embrittling process. I will then describe research at Oxford on the development of 3-D Discrete Dislocation Plasticity (DDP) models to provide insights into how hydrogen influences plastic deformation and the development of stress state in a body at the microscale. This will be followed by a description of continuum modelling approaches, which couple models of plastic deformation, diffusion and decohesion. Examples will be presented of how these models can be used to model and provide insights into the embrittlement process. 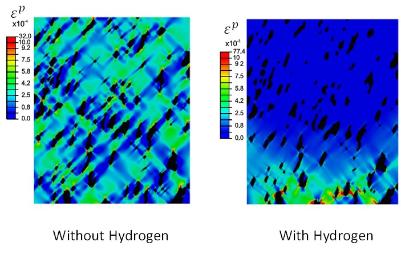