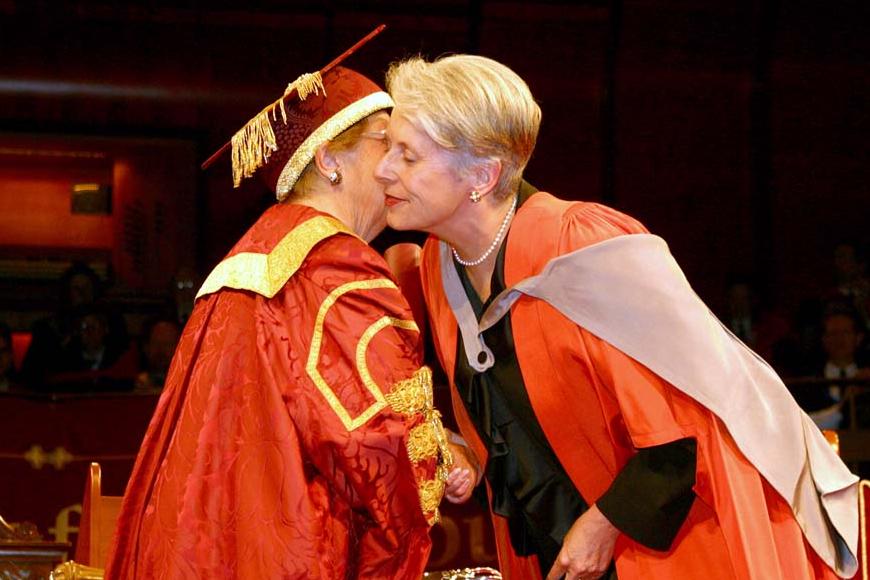 The Honourable Dame Silvia Cartwright, PCNZM, DBE, QSO, DStJ received a Honorary Doctor of Laws from the University of Canterbury in 2002.

Honorary Doctorates Tā Tipene O’Regan and the Honourable Dame Silvia Cartwright, PCNZM, DBE, QSO, DStJ were both appointed to New Zealand’s most senior honour as Additional Members of the Order of New Zealand in the 2022 Queen’s Birthday Honours list for their services to New Zealand.

An advocate for women and women’s rights, the Honourable Dame Silvia Cartwright received a Honorary Doctor of Laws from UC in 2002 in recognition of her distinguished career as a lawyer and jurist. She has dedicated more than 40 years to the law and became the first woman in Aotearoa New Zealand to be appointed to the High Court in 1993. In 1987 and 1988, Dame Silvia chaired the Commission of Inquiry into the Treatment of Cervical Cancer and Other Related Matters at National Women’s Hospital. The inquiry, known as the Cartwright Inquiry, was a landmark in New Zealand’s medical history. She is patron to more than 150 organisations and charities and regularly represents Aotearoa New Zealand on the world stage. In April 2002 she became patron of UC’s Te Awatea Violence Research Centre.

Also recognised as the Kiwibank New Zealander of the Year this year, notable UC alumnus Tā Tipene O’Regan has worked tirelessly throughout his life to improve the economic, cultural and social standing of Māori communities. The inaugural Assistant Vice-Chancellor Māori at UC and a current Adjunct Professor, Tā Tipene is one of the most influential and important tribal members in the modern history of Ngāi Tahu. His significant achievements include being the Chief Negotiator for Te Kerēme – the Ngāi Tahu Claim, which culminated in the Ngāi Tahu Settlement in 1998 – and becoming a key architect of the Treaty of Waitangi Settlements process.

UC is proud to recognise the honours bestowed on the following UC alumni and former staff members:

ONZM Officer of the New Zealand Order of Merit:

Mrs Lorraine Scanlon, of Nelson. For services to Victim Support and the community. Mrs Scanlon has chaired the National Council of Victim Support since 2006 and led strategic planning for the organisation’s 10-year plans ‘Vision 2020’ and ‘Vision 2030’. She has a certificate in Social Work from UC.

Dr Oliver Sutherland, of Nelson. For services to the law and Māori and Pacific communities. Dr Sutherland has dedicated more than 50 years to addressing institutional racism in Aotearoa New Zealand and has advocated for reform within the judicial system. He has a Bachelor of Science with Honours from UC.

Ms Anne Urlwin, of Wanaka. For services to business. Ms Urlwin has been a director, a chartered accountant and business consultant for more than 20 years. She has a Bachelor of Commerce from UC.

MNZM Member of the New Zealand Order of Merit:

Mr Nicholas Atkins, of Christchurch. For services to science and the community. Mr Atkins has been contributing to education and science since 1985 through the Science Badge Award Trust. He is a graduate of the former Christchurch Teacher’s College (now the Faculty of Education).

Mr David Ayers, of Christchurch. For services to local government and the community. Mr Ayers has contributed more than 40 years to his local community and local government in the wider Canterbury region. He has a Master of Arts with Second Class Honours from UC.

Reverend Louise Deans, of Canterbury. For services to the community and women. Reverend Deans has been contributing to the Canterbury community for more than 30 years. She has a Bachelor of Arts from UC.

Ms Kim Shannon, of Christchurch. For services to education and the Public Service. Ms Shannon established and led the Ministry of Education’s Education Infrastructure Service (EIS), which has managed all large, complex construction projects on behalf of schools and is responsible for maintaining and modernising around 2,300 state schools. She has a Bachelor of Arts from UC.

Mrs Susan Hume, of Christchurch. For services to education. Mrs Hume has led Avonside Girls’ High School (AGHS) through several difficult periods including the Canterbury earthquakes in 2011, the Christchurch mosque shootings in 2019, the COVID-19 pandemic, and the work to ensure a successful transition to the new-build co-located Avonside Girls’ High School in April 2019. She has a Master of Arts with Honours and a Postgraduate Diploma in Educational Leadership from UC.

Ms Nedra Johnson, of Christchurch. For services to the community and education. Mrs Johnson has been involved in a range of community organisations in Canterbury since the 1960s. She has a Certificate in Liberal Studies from UC.

Ms Jeanette Leebody, JP, of Dunedin. For services to netball and the community. Ms Leebody has dedicated more than 50 years to education and netball in New Zealand. She is a graduate of the former Christchurch Teacher’s College (now the Faculty of Education).

Mr Craig McFarlane, of Papamoa. For services to education and music. Mr McFarlane has had a career in education, beginning at Hamilton Boys High School before becoming Head of Mathematics and Science at Kaitaia College in 1971. He is a graduate of the former Christchurch Teacher’s College (now the Faculty of Education).

Mr Larry Morgan, of Napier. For services to canoe sports and viticulture. Mr Morgan was Secretary of Hawke’s Bay Canoe Polo from 2007 to 2011, Secretary/Treasurer of Hawke’s Bay Kayak Racing from 2010 to 2015 and National Secretary of New Zealand Canoe Slalom from 2006 to 2009. He is a graduate of the former Christchurch Teacher’s College (now the Faculty of Education).

Ms Lynda Wallace, of Akaroa. For services to heritage preservation and the community. Ms Wallace has been Director of Akaroa Museum since 2001, guiding the museum through challenging periods including repairs post-Canterbury earthquakes. She has a Diploma in Fine Arts from UC.

Dr Ian Hawes, of Tauranga. For services to Antarctic science and conservation. Dr Hawes specialises in the biodiversity and ecosystem function of inland and coastal waters and has made significant contributions to knowledge of freshwater ecosystems in both New Zealand and Antarctica. He was a professor in the Centre for Antarctic Studies and Research at UC from 2010 – 2011.