A Kiwi Paralympic athlete has been given extra speed on the slopes after University of Canterbury (UC) engineers crafted a ground-breaking new aerodynamic design for his sit ski. 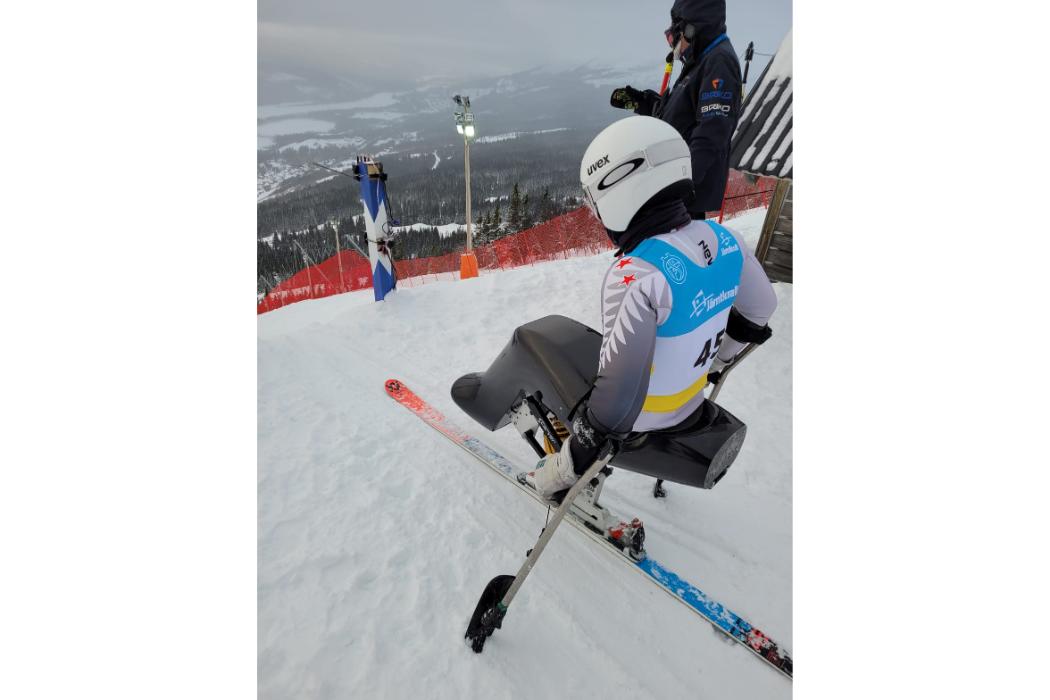 Snow Sports NZ approached the University of Canterbury in late 2020 for help to ensure Corey Peters, who is competing in the Beijing Winter Paralympics which open this weekend, has equipment that’s as competitive as he is.

Sit skis feature a seat and suspension system mounted to a single ski. Peters, from Taranaki, took up sit skiing in 2011 after he suffered a spinal injury in a 2009 motocross accident. He won a bronze medal in the Downhill event at the 2018 Paralympic Games.

The project was funded by High Performance Sport New Zealand (HPSNZ), with University of Canterbury Mechanical Engineering Lecturer Dr Natalia Kabaliuk, along with three students under her supervision, spending about a year improving the aerodynamic design of Peters’ standard, off-the-shelf sit ski.

Mechanical engineering students Matthew Henderson and Ekaterina Lieshout worked on redesigning the leg cover of the sit ski with the help of a local composite manufacturer, Dynamic Composites, while Master of Engineering student Tessa Impey redesigned the seat to incorporate a Kamm tail – an innovative rear design feature to minimise aerodynamic drag.

During the process the team used wind-tunnel testing and Computational Fluid Dynamics (CFD) to measure how their modified designs reduced drag force.

Overall, Dr Kabaliuk says the improvements have led to a maximum of 10 per cent “drag force reduction” in the modified sit ski, which she describes as very significant.

“It’s massive for this kind of sport. You might expect to get a one or two per cent reduction at best. Snow Sports NZ was very happy with the proposed new design, and we are really excited to see what Corey can achieve with it when he competes at the Winter Paralympics.”

HPSNZ Performance and Technique Analyst Dr Cameron Ross, says the aerodynamic improvements made by the University of Canterbury are “world-leading”.

“We are the only country that has been able to reduce overall drag by improving airflow at the back of the sit ski. Countries such as the United States and Japan have invested millions of dollars into the aerodynamics of their athletes’ sit skis, however we feel we have produced a better overall aerodynamic product for Corey with the help of the UC team.”

Peters rode the new sit ski design in competition for the first time at the World Para Snow Sports Championships in Lillehammer, Norway, in January where he placed fourth in the Men’s Giant Slalom, and again at the Super G World Cup in Sweden where he won Bronze.

Peters says data shows the improved design of his sit ski will, in theory, allow him to ski faster.

“It’s quite possible I will have the most aerodynamic sit ski among all my competition in Beijing, so this will be a massive advantage straight away, particularly in my favoured events of Downhill and Super G where the speeds are much higher. This certainly gives me increased confidence knowing that my equipment will be fast and more streamlined than anybody else’s.”

He says he’s grateful to everyone involved in the project. “The only thing now left to do is go out there and perform at my best and ultimately bring home the Gold Medal.”

The Beijing Winter Paralympics will run from 4 - 13 March.