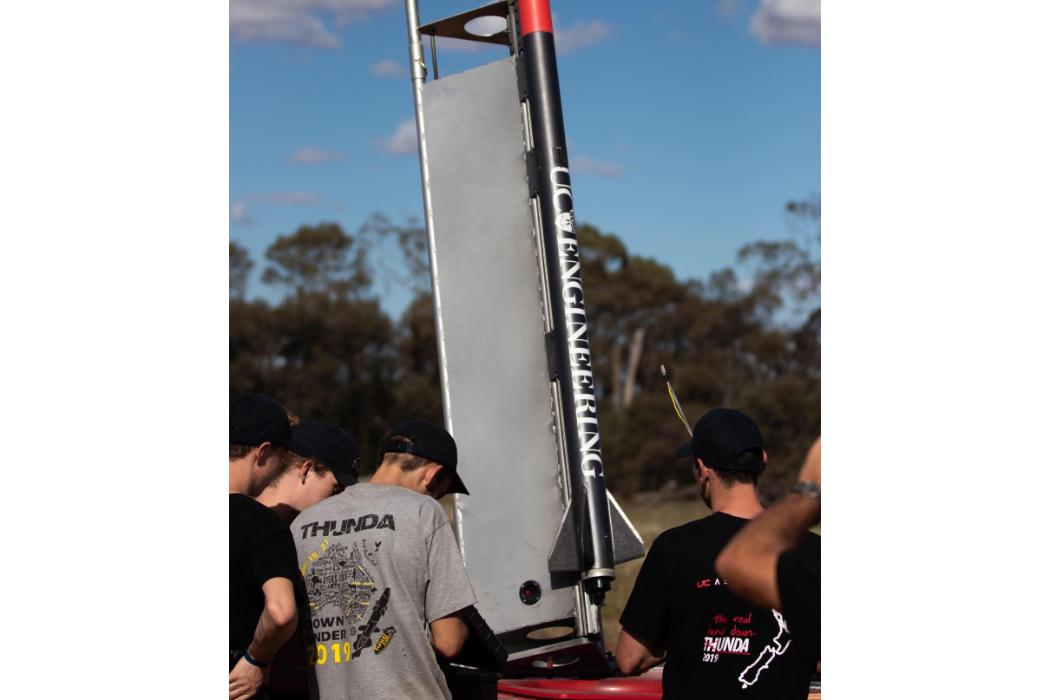 UC Aerospace was commended for their unique innovation of implementing a real-time active air-braking system which allows for supersonic and subsonic drag behaviour.

The student competition was part of the international Thunda Down Under 2019 event that included about 1200 rocket launches, watched by 5000 people in the Australian outback, with participants from the United States, Australia, India, Germany, Netherlands, England, and Japan.

The UC students’ aim was to get their rocket to as close to 30,000 feet as possible. First they had to design, build and launch a single-stage, high-powered rocket. Teams were scored on their design, the quality and innovation of their rocket, the rocket launch trajectory and the safe and accurate recovery.

The UC Aerospace team of engineering students developed an innovative solution which the UC Engineering Faculty Advisor to the team, Bruce Robertson, hoped would give them the advantage over the Australian universities.

“These students’ passion for rocketry is contagious and it’s a real thrill to support them,” Robertson says. “They’ve done the hard yards on this project, with no days off for a long time.”

UC Aerospace had a very successful Easter weekend in Queensland when their ‘Into the Blue’ high-powered rocket was successfully launched and recovered twice.

The first launch’s purpose was to collect flight data to inform the second (competition) launch, and also to conduct an experiment in collaboration with the UC School of Biological Sciences. The payload for this experiment consisted of 10 centrifuge tubes containing various biological materials which were subjected to high g-loading and a significant period of microgravity. The results of this experiment will be used to confirm models that will later be applied on samples delivered to the International Space Station.

“While not the primary purpose of this launch, it also unofficially set a new altitude record for a student-built rocket launched from Australasia,” Robertson says.

The second launch was the UC entry into the Australian Universities Rocket Competition (AURC). The flight objective portion of the competition was to launch and recover data from a rocket with an apogee (max. altitude) as close to 30,000 feet as possible.

“UC’s team achieved the second best result with an apogee of 30,738 feet, narrowly bettered by RMIT University. We were the only team in the top three to recover an undamaged rocket. The University of Queensland had to dig 2.5m underground to recover theirs,” Robertson notes.

UC Aerospace was commended for their unique innovation of implementing a real-time active air-braking system which allows for supersonic and subsonic drag behaviour. The control system was set very conservatively for the competition flight due to a lack of testing, but the data subsequently showed it to be a very effective system that works as designed, he says.

“Due to Australian Civil Aviation Authority airspace restrictions imposed on the Thunda 2019 event, the team was unable to launch their two-stage ‘Into the Black’ rocket, which has the potential to reach space. Our team are currently reviewing options for a second space-shot attempt from New Zealand,” Robertson says.

“Our team were evidently the smallest and least funded of all the Australasian university teams present, but overall UC Aerospace designed and built the most sophisticated, reliable, and highest performing rocket. This shows we must be doing something right.”