Weka are often portrayed as little more than sandwich-stealing scallywags. However, a new study by University of Canterbury and Department of Conservation researchers has found that these charismatic birds also perform important services for Aotearoa New Zealand forests. 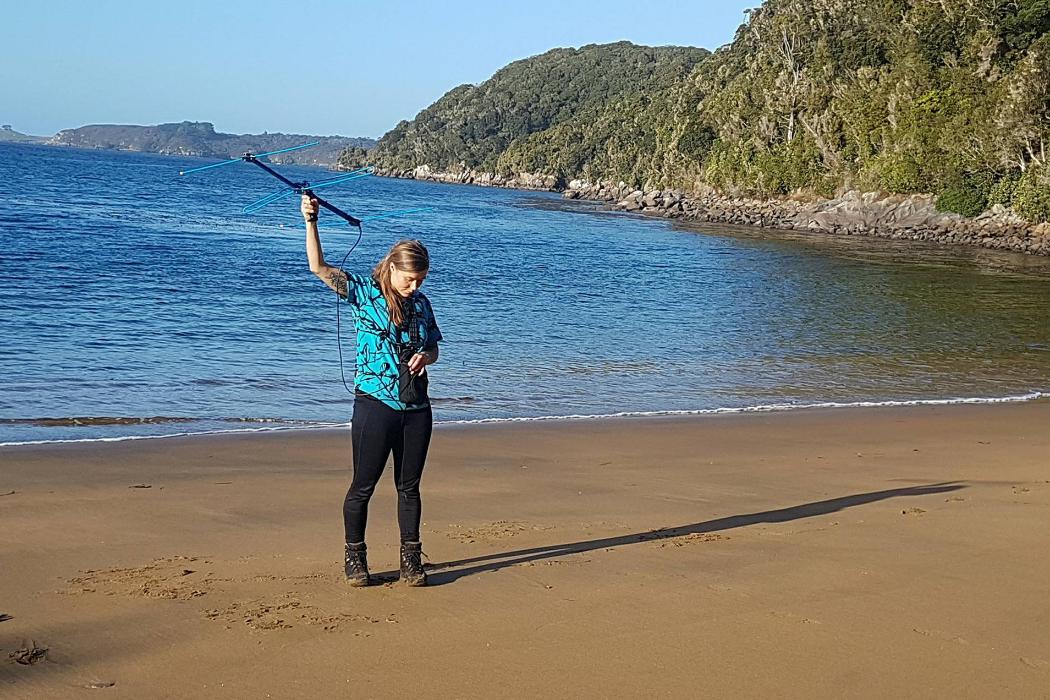 University of Canterbury doctoral candidate Jo Carpenter on Ulva Island radio tracking weka to find out where they are. (Photo credit: Theo Thompson).

Weka are often portrayed as little more than sandwich-stealing scallywags. The large, brown flightless bird’s tendency to be curious and gobble any food available (whether it be an unwatched biscuit, penguin egg or endangered gecko) also makes them troublesome for conservationists. However, a new study by University of Canterbury and Department of Conservation researchers has found that these charismatic birds also perform important services for Aotearoa New Zealand forests.

Although birds like the kererū (wood pigeon) tend to get credit for dispersing seeds, it turns out weka are important seed dispersers for some New Zealand plants. They eat the fruits of many plant species, and have a large beak that allows them to also eat fruits that smaller birds can’t manage. A new study, published today in Royal Society Open Science, found that weka even disperse some seeds as far as kererū do.

“You might think that because weka are flightless they wouldn’t be very good at moving seeds large distances,” says lead author Jo Carpenter, a University of Canterbury (UC) Ecology PhD student now based at Manaaki Whenua | Landcare Research. “But it turned out they were dispersing a small proportion of seeds over two kilometres – that’s a long way for a seed.”

The researchers investigated how far weka moved seeds by attaching GPS transmitters to over 40 birds, then figuring out how long it took seeds to pass through weka. By understanding how long it takes a seed to typically pass through a weka, they could model how far seeds eaten by weka would be travelling. Because some seeds stay inside the birds as long as six weeks, the weka can deposit them far from where they were eaten.

The researchers also made a worrying discovery. Weka near public campsites didn’t move seeds as far as those in remote areas. In fact, weka at campsites dispersed seeds 35-40% shorter distances than weka in nearby forests.

“It’s what happens when an animal is still present in an ecosystem, but due to human impacts it’s not providing the ecosystem services that keep everything working properly. We think that weka that spend more time at campsites get more food from people, and therefore don’t have to forage as far. That means they disperse seeds shorter distances,” Professor Kelly says.

These reduced seed-dispersal distances could affect long-term forest replacement, especially in human-modified landscapes where dispersal maintains genetic diversity across surviving forest patches. This might be a particular problem for large-seeded native trees, like hinau, for which weka are one of the most important seed dispersers.

“This is one of the first studies showing that interaction with people could have a significant effect on the quality of seed dispersal performed by an animal. That’s concerning because even our wild places are becoming increasingly crowded with people,” says Carpenter.

“So next time you see a weka, think twice before you offer it your lunch!”