A collaborative study from an international team of researchers has determined the conditions needed for an earthquake to trigger a volcanic eruption. 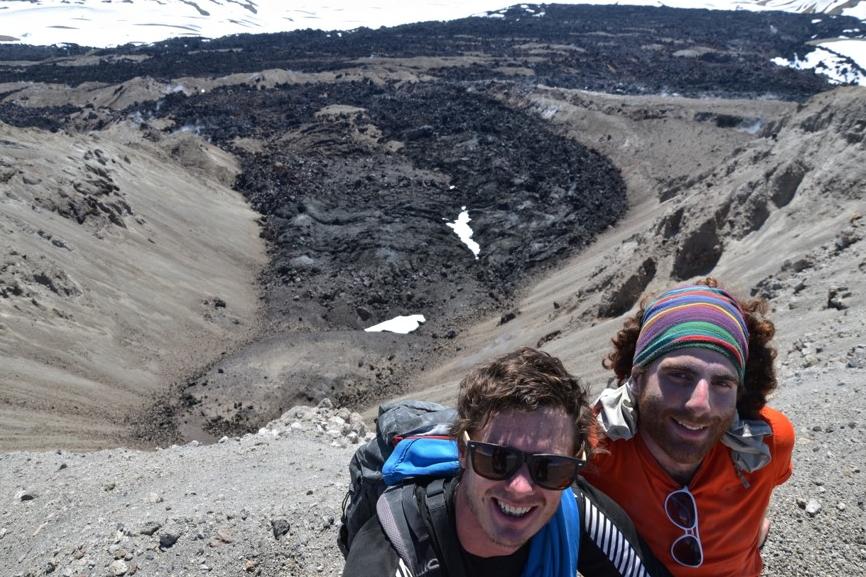 Professor Ben Kennedy and PhD student Gilles Seropian on the edge of the Córdon Caulle crater in Chile. Córdon Caulle erupted two days after the Valdiva earthquake of 1960.

Compiled from a large selection of existing data, the paper covers a range of specialised fields; from syrup volcano laboratory-models to infrared satellite monitoring and complex mathematical models describing the behaviour of earthquakes, and may have widespread benefits for future volcanic and seismic research around the world.

The researchers believe the paper’s findings could help improve volcanic hazard assessment as it emphasises the need for detailed monitoring of volcanoes following a large earthquake which, in certain circumstances, could accelerate an eruption.

Seropian, the lead author, said the variety of data used in the study was impressive. “It definitely required a team effort to gather and understand it all, but it’s actually quite exciting to work with such different aspects of science, trying to find a way to combine them into something that’s useful.”

The multi-disciplinary team created a single, useable model covering most aspects of how earthquakes impact volcanoes.

The study focussed on three key parameters that dictate how a volcano could respond to a big shake – every volcano is unique, so they will never respond to an earthquake in the same way.

These three parameters are measureable aspects of every volcano, regardless of location and size. If an earthquake takes place near a volcano, experts will be able to determine its response, based on the behaviours of these parameters, as they apply to that volcano.

Hydrothermal systems are very sensitive to earthquakes. If they are destabilised following an earthquake, they could cascade all the way to the magma, triggering an eruption. Should an earthquake take place close to Ruapehu or Tongariro, rising steam from the crater lake or steam vents could be an indicator of the shake’s effect on the volcano.

While the thought of an earthquake triggering a volcano sounds concerning, particularly in these shaky isles, historical records show that this rarely occurs and in fact, it’s unlikely an earthquake will trigger an eruption, unless the volcano is already on the brink of erupting.

Seropian explains this using an adage that compares the eruption of a volcano to the knocking over of a coffee cup [equating the cup to a volcano], saying, ”there are many ways to knock the cup off the table but if it is empty, it does not result in a catastrophe.”