A University of Canterbury-led international study of the crabeater seal population in Antarctica aims to understand potential environmental and social impacts on one of the southern-most mammals in the world, and democratise science. 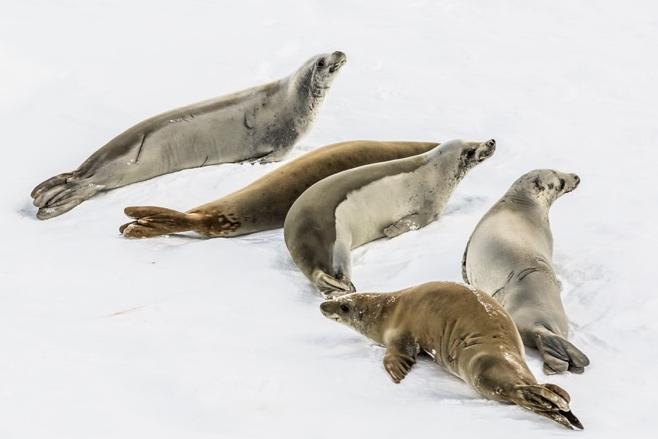 You could be a citizen scientist. How many crabeater seals can you see? Photo: Jessica Farrer

University of Canterbury (UC) Gateway Antarctica scientific researcher and lecturer Dr Michelle LaRue is using high-resolution satellite imagery and volunteers from around the world to analyse crabeater seal populations across the Weddell Sea – one of Earth’s last wildernesses.

This research could support the establishment of a large no-take marine protected area (MPA) in the Weddell Sea, that would protect critical foraging and breeding grounds and help this vital ecosystem build resilience to the effects of climate change.

“The exciting aspect for me is that people can be directly involved with my research,” says Dr LaRue. “Anyone in the world with an internet connection can do research alongside me by reviewing the satellite images and simply telling me what they see.”

With funding from The Pew Charitable Trusts’ Protecting Antarctica’s Southern Ocean Campaign, Dr LaRue hopes the results will help shine a light on how crabeater seal populations may fare in the face of environmental changes. These results will help relevant policymakers, industry experts and non-governmental organisations use scientific findings to protect the biodiversity of this unique habitat.

“These species are facing substantial conservation challenges in our changing physical and social environments. Analysing population dynamics can help us understand how these animals are dealing with these environmental changes, and how the overall populations are being effected,” explains Dr LaRue.

This is not the first time Dr LaRue has called upon citizen scientists. The UC scientist has previously worked with Tomnod, a digital platform that recruits online volunteers to identify important objects and explore interesting places around the world using satellite imagery. From tracking damage caused by Hurricane Maria in Dominica and Puerto Rico, to scouring land consumed by wildfires, Dr LaRue is using people’s fascination with science and nature to solve global problems.

“What I love about this research is there are several impacts: democratising science, engaging people with the scientific method, and empowering people to make a difference in the world.”

By involving the public, Dr LaRue aims to make science more accessible and approachable to those outside of academia.

In 2016, approximately 330,000 online volunteers assisted her with counting Weddell seals in Antarctica. Dr LaRue is expecting similar engagement with this project.

The benefits of this study will reach far beyond the public. In October, delegations from 24 countries and the European Union will meet for the annual meeting of the Commission for the Conservation of Antarctic Marine Living Resources (CCAMLR), to discuss conservation of the Southern Ocean. Dr LaRue’s research will be taken into consideration as delegations decide whether to designate the Weddell Sea as a MPA, which would protect critical habitat for crabeater seals, and other species who thrive in the region.

A Weddell Sea MPA designation would contribute to a commitment CCAMLR made to create a full network of large-scale MPAs through the Southern Ocean, and serve as a major contribution towards the international conservation goal of safeguarding at least 30 percent of the world’s oceans by 2030.

You can help find crabeater seals

Dr LaRue is recruiting online volunteers to spot crabeater seals around Antarctica. In true democratic fashion, anyone interested is welcome to contribute. The only requirements are that you have a computer, internet access, and review the brief instructional guide provided on the website.

If you are interested in joining her team of citizen scientists, visit www.tomnod.com  for more information.