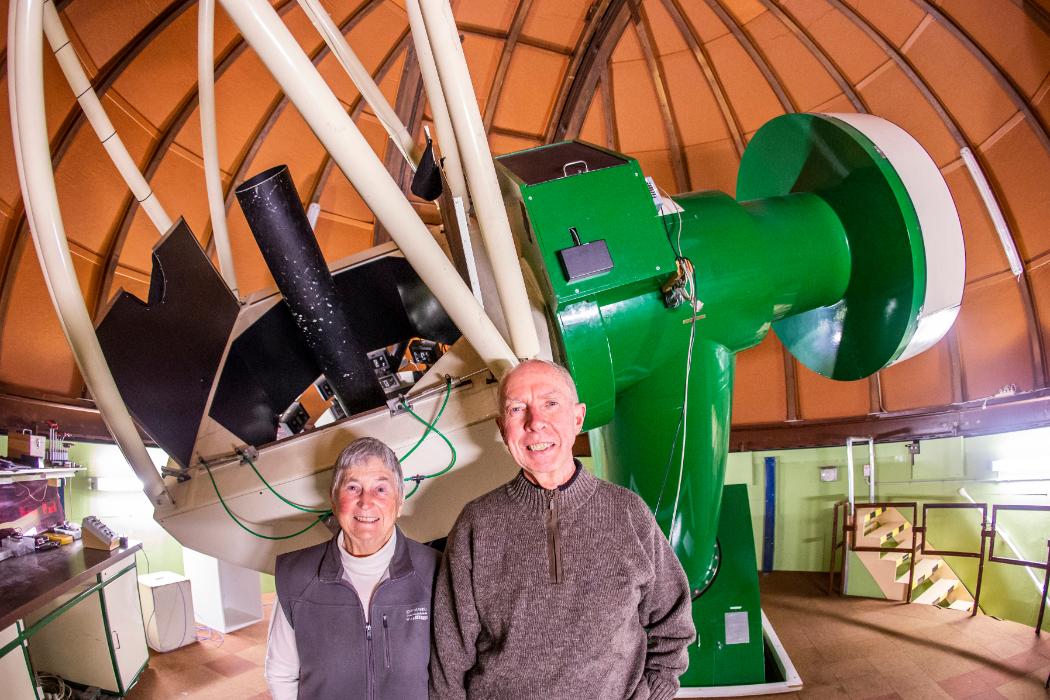 Astronomers Pamela Kilmartin and Alan Gilmore work with the country’s second-largest telescope, the one-metre McLellan reflector, which was built in UC’s workshops and installed at UC’s Mount John Observatory in 1986.

Long-serving staff members of UC Physics and Astronomy, Gilmore and Kilmartin have been observers at UC’s Mount John Observatory, Tekapo, since 1980. Fellows of the Royal Astronomical Society of New Zealand, they track Near Earth Objects (NEOs) such as asteroids and comets that may be a long-term threat to Earth. Together they have discovered 41 minor planets, a comet and a nova.

“We were surprised to be included in such illustrious company as Beatrice Tinsley and Sir William Pickering on the stamp set,” says Gilmore of the New Zealand Post honour.

“We just help astronomers around the world to determine the orbits of objects passing near the Earth and from time to time we discover previously unknown minor planets located in the asteroid belt between Mars and Jupiter.”

They work with the country’s second-largest telescope, the one-metre McLellan reflector, which was built in UC’s workshops and installed at UC’s Mount John Observatory in 1986.

“I work the telescope, while Pam does the image processing and measurements,” says Gilmore.

“We are part of a global network. Scientists in Arizona and Hawaii discover objects and report them to the Minor Planet Centre (MPC) in Cambridge, Massachusetts. We select targets for follow-up from the MPC’s webpage and make further observations. We can image NEOs to 22nd magnitude, a millionth of the brightness of the faintest star seen by the naked eye.”

Most of their observatory activity requires working the night shift. The couple, who have been married for 45 years, say they are too busy working together to feel lonely in the remote part of the South Island.

‘Queen of the Cosmos’ Beatrice Tinsley was one of the most creative and significant theoreticians in modern astronomy. She graduated from the University of Canterbury with an MSc in Physics with First Class Honours in 1961. She then completed her PhD on the evolution of galaxies at the University of Texas in just two years.

After a one-year fellowship at the Lick Observatory of the University of California she took up an assistant professorship at Yale University, before becoming Yale’s first female Professor of Astronomy in 1978. That year she was diagnosed with melanoma. She continued to publish until shortly before her death in 1981. Her academic career spanned only 14 years but she produced 114 scientific papers, had an academic prize and a visiting professorship in astronomy named in her honour. In 2009 to mark the International Year of Astronomy, peaks in the Kepler Mountains in Fiordland National Park were named to honour Professor Tinsley and Sir William Pickering – Mount Tinsley and Mount Pickering. UC’s newest Science precinct building is named for her, and sits next to the Ernest Rutherford building.

Sir William Pickering was one of the world’s leading space scientists; a titan of the US space programme. He was a senior NASA luminary, who pioneered the exploration of space.

Born in 1910 in Wellington, he developed an interest in stars at high school and studied engineering at UC (then known as Canterbury College) before moving to the California Institute of Technology (Caltech). After finishing his degree in electrical engineering and unable to find work in New Zealand, he returned to Caltech to complete a Master’s degree followed by a PhD in Physics in 1936.

Made a professor in charge of radio and electronics, he was also appointed to the Scientific Advisory Board of the United States Air Force. During World War 2 he worked in their Jet Propulsion Laboratory (JPL). By 1954 he was the lab’s director where his scientific ability and sense of diplomacy enabled him to work with scientists, politicians and military officials. He remained there for 22 years.

He had success with various unmanned spacecraft, appeared on the cover of Time magazine twice, and saw his work with Ranger VII spacecraft confirm the moon is not covered in dust. He retired from JPL in 1976 and kept close New Zealand ties. New Zealand awarded him an honorary knighthood, which would sit among personal messages from five US presidents. UC presented him with an honorary doctorate in 2003, before his death in 2004.