Beatrice Tinsley building opening a milestone for science at UC

The official opening of the Beatrice Tinsley building this week marked a significant milestone for the University of Canterbury (UC) – the completion of the Rutherford Regional Science and Innovation Centre (RRSIC). 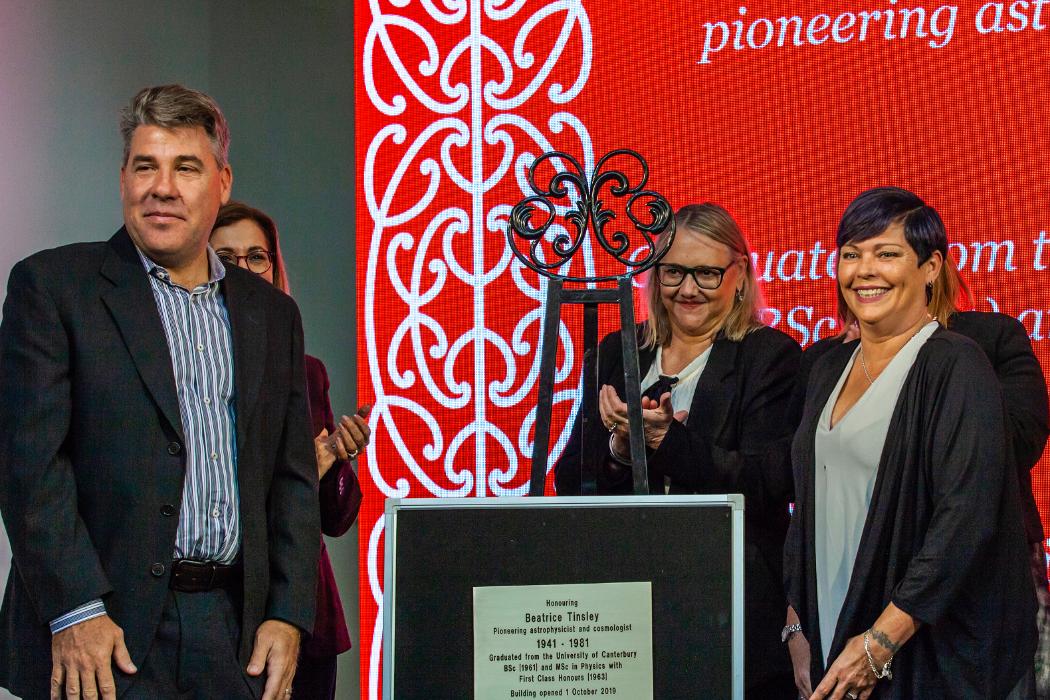 The official opening of the Beatrice Tinsley building this week marked a significant milestone for the University of Canterbury (UC) – the completion of the Rutherford Regional Science and Innovation Centre (RRSIC).

The new home of UC College of Science staff and postgraduate students, the Beatrice Tinsley building was opened by Hon Dr Megan Woods, Minister of Research, Science and Innovation, Vice-Chancellor Cheryl de la Rey and Pro-Vice Chancellor Science Professor Wendy Lawson, in front of 130 guests including members of Beatrice Tinsley’s family, some of whom travelled from the United States to be there.

UC alumna Beatrice Tinsley (1941 – 1981) is known as one of the most creative and significant theoreticians in modern astronomy. She graduated from UC with a Bachelor of Science degree (1961) and Master of Science in Physics with First Class Honours (1963) before going on to complete a doctorate at the University of Texas and take up a Professorial role at Yale University, becoming the university’s first female Professor of Astronomy.

Beatrice Tinsley was a role model and mentor to many New Zealand and American women during her academic career.

A UC alumna herself, Dr Woods admired Beatrice Tinsley’s curious questioning and innovative ways of viewing the world, explaining it was this kind of perspective the government wished to encourage.

“We want more young women to be inspired by women,” she said.

In announcing a $6 million funding boost to increase diversity in science, Dr Woods spoke to her relentless drive in promoting diversity across her research, science and innovation portfolios, and her frustration at the slow pace of change.

“Additional funding of $6 million over the next four years for programmes will improve the equity, diversity and inclusion of our people in our science system, and reinforce existing efforts to increase young girls and women’s participation in STEM, “she explained.

“The buildings are important, but what’s more important is the opportunity for teaching, learning and research relationships and capabilities they provide,” she said.

The building includes state-of-the-art secondary and primary science and technology laboratory facilities where students of the College of Education, Health and Human Development will learn to teach these subjects to future generations.

The opening of the Beatrice Tinsley building marks the completion of the University’s RRSIC project. Stage one, the Ernest Rutherford building, was officially opened February 2018 by Rt Hon. Prime Minister Jacinda Ardern.

“Completion of the Beatrice Tinsley building and the Rutherford Regional Science and Innovation Centre is a wonderful milestone to reach for the University. We are thankful for the Government’s investment in the project and look forward to the benefits it will provide for the University, its students and academics, and to economic growth in the region,” she says.

The UC-designed technology is now taught to UC engineering students and is being used in tall-timber buildings world-wide.