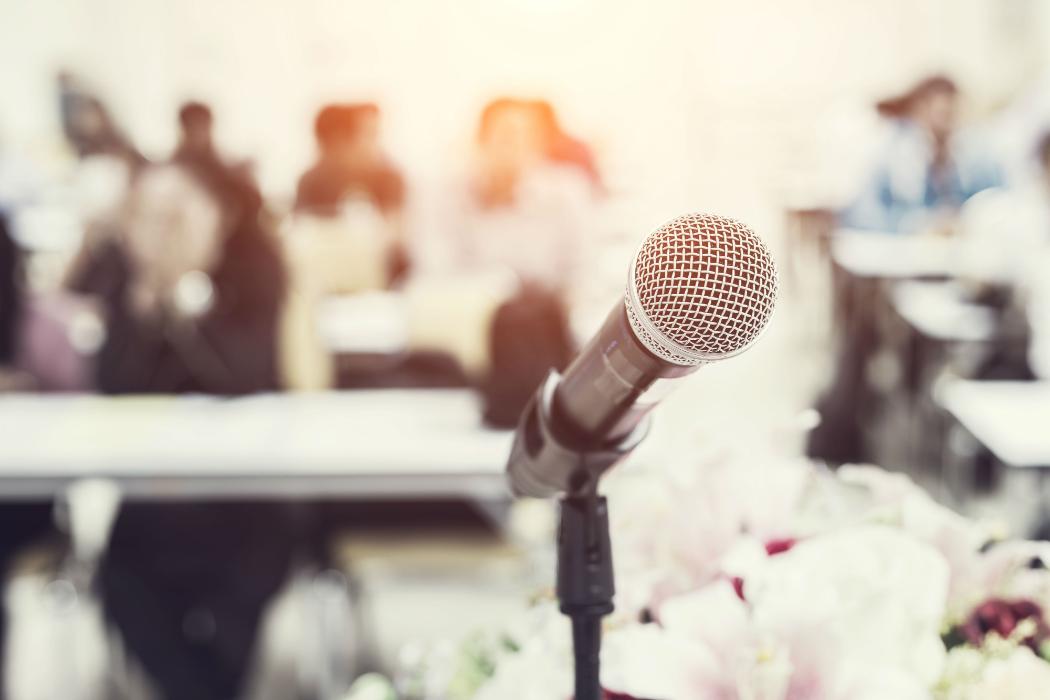 English Language studies focus on the structure, functions and contexts of use of English. Students learn about the sound systems and grammatical systems of English, and how English varies in different historical, geographical and social contexts.

The Certificate in Arts (CertArts) is designed for you if you want to study at university level without having to commit to several years of study. It is also an option if you want to take a few courses for interest or study part-time.

To find out more see the Qualifications webpages, or contact one of our staff members.

By the end of your degree, you will have acquired knowledge of the structure, functions and contexts of use of English. You will know about the sound systems and grammatical systems of English, and you will understand how English varies in different historical, geographical and social contexts.

For full details of the courses offered in English Language, follow the link box below.

English Language provides a foundation for careers which require advanced communication skills and/or a detailed understanding of how English works, such as teaching, management, marketing, the media, and publishing.

The goals of the major in English Language are to equip students with knowledge of:

How is the major in English Language structured?

For the major in English Language, you need a total of 135 points. 105 points come from the following five core courses:

How is the minor in English Language structured?

For the minor in English Language, you need a total of 75 points from the ENLA courses listed above, at least 45 of those points much be at 200 level or above.

NB: The ENLA courses above are also coded as LING courses (e.g. LING101 and ENLA101 is the same course). You obviously can’t do the same course twice, so if you have done LING101 you can credit it to either the Linguistics major or the English Language major.

No. The major in English Language is run by the Linguistics Department, and in it we focus on how the language works, and how it varies in different contexts, and how people use English for different purposes.

Also, as part of the English Language major, it is possible to substitute one of the optional Linguistics courses for a course available in the English Department. You would still graduate with a major in English Language, but you would have built in a course on English literature as well.

Is it possible to double major in English Language and Linguistics?

Yes, it is possible, but any given course is only allowed to contribute to a single major. To double major in English Language and Linguistics, you would need to pass the following courses, and a course from the English Department:

The Graduate Diploma in Arts offers people who hold a bachelors degree in a major in an unrelated area the opportunity to study arts in-depth, choosing from over 30 subjects.

The GradDipArts is designed for graduates seeking to qualify for entry to postgraduate qualifications in arts, to change career direction, or to extend or upgrade their existing qualifications.

Find out more about the Graduate Diploma in Arts on our Qualifications webpages or contact a staff member for advice.

Linguistics is not taught in schools, so no specific background is needed. The main requirements are curiosity and a desire to improve one's ability to think and express oneself clearly. Some knowledge of a language or languages other than English is desirable but not essential.

BA and BSC students are required to complete the following:

Requirements for a major in Linguistics

Students need to pass the following core courses in Linguistics:

Students must take two courses in Linguistics at 300-level one of which must be:

You can also take courses from other departments when studying toward a BA or BSc in Linguistics.

Requirements for a minor in Linguistics

Students must be credited with at least 75 points in Linguistics which must include at least 45 points at 200-level or above.

Honours is intended for people who already have a bachelor’s degree with a major in Linguistics. It is an extension of undergraduate study and an introduction to more advanced research.

The Linguistics Honours year is a taught programme with a research focus. It connects to and extends the work covered in Linguistics classes at undergraduate level. You will discuss the latest research in the field, and you will plan and carry out your own research in a small project, both by working individually and in collaboration with staff and other students.

Honours students are a very important part of the research culture of our department, and can often be found in our labs even when out of classes, working on their honours research and also on other projects. Honours students are regularly employed as research assistants on a wide range of projects, and so get the opportunity to enhance their research skills and get paid while doing so.

During your honours year, you will work on an individual research project (which we call LING480: Research Essay). After some classes focusing on research design and methodology, you will work closely with a supervisor or a small supervisory team and produce a research report on a linguistics topic of your choosing. As well as this, you choose three out of the four taught courses listed below:

Find out more about Honours in Linguistics.

If you have questions about Honours in Linguistics please contact the Linguistics Subject Coordinator.

The Master of Linguistics (MLING) is intended for people who already have a bachelor’s degree with a major in Linguistics (or who have a bachelor’s degree in a different subject and who have completed a qualifying paper in Linguistics). The MLING is a one-year Masters level qualification in which students extend their undergraduate study and carry out a substantial research project. Size and duration: 90 points of 400/600 level courses, 90 points research project; 12 months full time. Part time study is also available.

Find out more about the Master of Linguistics degree.

The MA Thesis LING690 is intended for people who already have BA (Honours) in Linguistics. Students carry out a substantial research project with guidance from a supervisor. There are no taught courses on this programme. Size and duration: 120 points research project; 1-2 years full time. Candidates can start at any time throughout the year.

The prerequisite for enrolment for an MA in Linguistics is a BA(Hons) in Linguistics. A first-class or upper second-class Honours grade will normally be required.

The Masters thesis is an original research project, normally not more than 40,000 words in length. Full-time enrolment for a Masters by thesis is for a minimum of one year and a maximum of three years. Candidates in Linguistics are encouraged to plan to complete the thesis within two years.

Prospective Masters and PhD candidates should identify a thesis topic in consultation with the prospective supervisor and prepare a preliminary research proposal. The proposal should identify the issue to be addressed, with a brief statement of how the proposed research relates to existing findings, outline the proposed research method, including an indication of the timetable for the project, and include a select bibliography.

For further details, see the pages of the individual staff members and their UC Research Profile.

The proposal should then be submitted to the Head of School for approval prior to enrolment. 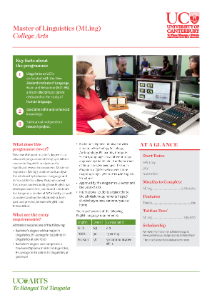 A number of scholarships are available to students of Linguistics and English Language.

Please visit the UC Scholarships homepage to search the scholarships database and to find the support you're eligible for.

University of Canterbury Scholarships for Masters and Doctoral candidates

The University awards scholarships for Masters and Doctoral candidates. The scholarships are awarded on a competitive basis in two rounds per year, with application deadlines in mid-May and mid-October.

To provide departmental endorsement of an application for a scholarship, the Head of Department requires a brief outline of the intended research topic and approval of the topic from the main supervisor. Please get in touch with individual staff members who might be able to supervise your topic to pursue this further. See the staff page for further information about research interests.

Other sources of funding

See all courses
Back to top