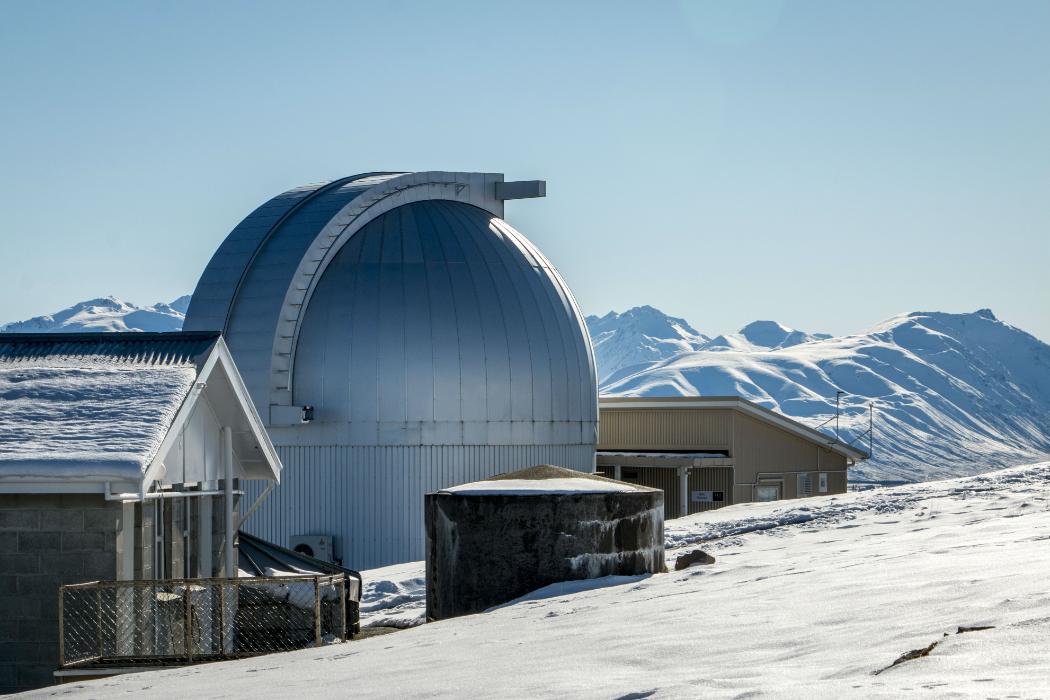 UC MJO is run by the School of Physical and Chemical Sciences at UC for the use of the Department's staff and students. Certain other New Zealand astronomers also use the facilities.

The optics of this 1.00-metre Dall-Kirkham reflecting telescope were polished by optical engineers from the DSIR's Physics and Engineering Laboratory (now Industrial Research Ltd). The mechanical and electronic work was done by Physics Department workshop staff in Christchurch. First light was in 1986 March.

Secondary optics are available for cassegrain foci at f/7.7 and f/13.5. Much of the work is now at the f/7.7 focus, which has wide-angle optics that provide a 1-degree diameter field of view. The f/13.5 focus is only used for single stars on axis. The dome automatically tracks the telescope. All available MJUO instruments can be mounted on the McLellan Telescope. Work has been underway for several years to improve the balance and pointing performance of the telescope.

This 0.61-metre reflecting telescope was completely refurbished by Physics Department technical staff in 1979. The cassegrain focus is at f/16. Because of the fork mounting, only the direct camera and the photometers can be used on the Optical Craftsman Telescope. The telescope is normally reserved for photometry.

In late 1991 the telescope was completely upgraded with new stepper motor drives and computer control, including automated dome setting.

This 0.61-metre reflecting telescope was purchased in 1975 and has a cassegrain focus at f/13.5. All available MJUO instruments can be mounted on the Boller & Chivens Telescope: however, the medium resolution spectrograph cannot reach the pole.

Opened in 2004 December, this telescope was built by Japanese astronomers and is dedicated to the MOA project. (MOA had previously used the 0.6-m Boller & Chivens Telescope.)

Radial velocity precisions of 3-4m/s are possible. The wavelength coverage is complete from 370nm to 890nm with a 4k by 4k CCD.

Two single-channel photoelectric photometers ("No.1" and "No.2")

The filter wheels are interchangeable between these two photon-counting photometers, and the Observatory has the following filters available: UBV (Johnson); VRI (Cousins); uvby (Stromgren) Hbeta (Crawford & Mander) and Halpha. The photomultipliers are thermoelectrically cooled. The following tubes are available: EMI 9558 B; EMI 6094 B. The cold boxes are equipped with quartz windows. The photometers are controlled by IBM compatible AT or 386 computers. Acquisition programs are available for both differential and absolute photometry. Data output is usually on a printer and on floppy diskette.
A stabilised light supply is available for day-time measurements of the PMT/discriminator deadtimes. TurboPascal software has been written to control the computers.

Three gratings are available as follows:

The camera is a folded Schmidt design. The Series 2000 CCD system is the detector.

Designed for use with the Photometrics PM3000 CCD system, but now used with the Series 2000 system.

The photometer head includes an off-axis CCD guider and automatic filter wheel, which allows high-precision CCD photometry of faint objects to be undertaken.

The Carter Observatory (Wellington) and the Physics Department of the Victoria University of Wellington maintain a private two-channel photometer at Mt John.

Enquiries concerning its use should be addressed to Dr. D. Sullivan, School of Chemical and Physical Sciences, Victoria University of Wellington, Private Bag, Wellington, New Zealand

Little photographic work is now done at Mt John. Photographic plates were used for the Harvard Sky Patrol conducted with the Damon cameras, which have now been removed from their enclosure and put in store. Sensitization by baking in forming gas is available. Kodak 2415 recording film can be used in the direct camera.

Only available for the photometers. See two single-channel photoelectric photometers ("No.1" and "No.2") in the Instruments above.

This detector system was installed at Mt John in October 1989. It comprises a Thomson CSF TH7882 CDA CCD chip, overcoated with Metachrome II for enhanced UV response, installed in a Photometrics CH210 cryostat.

The PM3000 system is no longer in use at Mt John, but there are plans to use it in the teaching laboratories in Christchurch.

This cryogenic detector system was received during the first half of 1996. The chip is a SITe SI 003 1024 x 1024 thinned CCD with 23-micron square pixels and overcoated with Metachrome. Commissioning of this detector was completed in early 1997 and it is now the Observatory's principal detector.

The chip is a back-illuminated Fairchild 486 CCD comprising 4096x4096 15µm pixels. Cooling to the operating temperature of ~–100 °C is via a CryoTiger closed-circuit liquid refrigerant system. It is expected that this system will be used almost exclusively with HERCULES.

Find out more about applying for telescope time.