Long read: reflections of a volcanologist as a science organisation faces charges in the wake of the 2019 Whakaari eruption

Volcanologist Professor Ben Kennedy had spent 12 years studying why Whakaari erupts and is now sharing his thoughts on the disaster in an article on The Conversation. 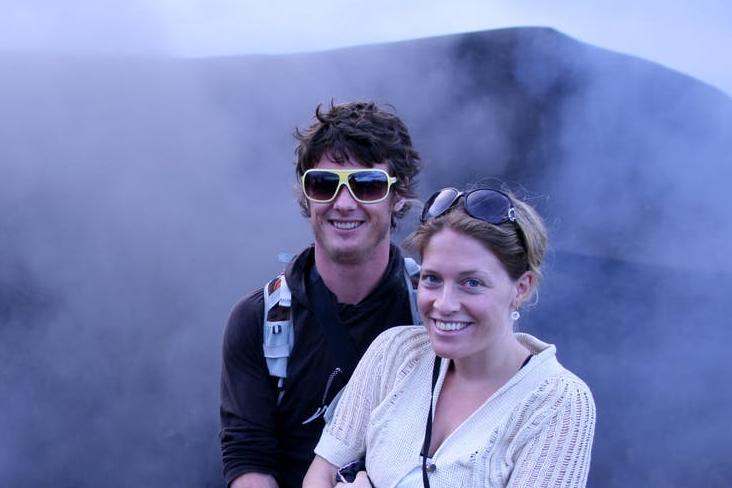 Professor Ben Kennedy and his wife at Mt Yasur on Tanna Island, Vanuatu.

This week, a case review hearing sought to set a trial date – now likely in 2023 – for 13 organisations and individuals facing charges in the wake of the Whakaari White Island eruption of December 9 2019.

The volcano erupted while 47 people were on the island, leaving 22 dead and survivors with severe or critical injuries.

Among the parties facing criminal charges is a research organisation that monitors volcanic activity on the island. For me, as a volcanologist, this highlights the perils of assessing hazards and communicating the risk of natural hazards.

A few years ago my wife and I visited an active and dangerous volcano. She was pregnant with our first child, and we were on a romantic holiday heading through the jungle of Tanna Island, Vanuatu, to watch the spectacular eruptions of Mt Yasur.

Seeking reassurance, she asked if it was safe. I hesitated and said yes, and added something about it being safer than riding a bike in the city.

I am volcanologist and had done my research and decided for both of us that the risk was acceptable. I knew of two fatalities, but also that between ten and 100 people visited the volcano every day and these tours had been going on for about 30 years. My back-of-envelope calculation meant a 1 in about 100,000 chance that we might die, and I was ok with these odds.

We had an exciting experience, and it was only on the way back that I confessed two people had died on the volcano. My wife smiled and said she might not have agreed if she had known, but was glad we had done the trip.

I have since been back to Mt Yasur for research with colleagues to calculate more accurately the hazard to tourists, and where on the volcano the hazard from eruptions is the highest.

As always in science, the results are complicated, but have been communicated to those responsible for managing the hazard. We need to do more work to translate our hazard numbers into risk numbers for tourist operators or regulating bodies to inform their decisions.

The shock of the tragedy

The tragic eruption of Whakaari White island hit me hard. I was in London at the time, and at first I was ok, being driven all over the city for media interviews. My phone was going all night.

But then I found out Hayden Marshall-Inman hadn’t made it back. I knew him as a laid back, smiling volcano guide and skipper who had taken me out to the island many times. Suddenly I felt different and stopped all media interviews. I felt a deep sense of guilt.

I’d spent the last 12 years studying why Whakaari erupts and why it sometime does so without much warning. I always requested to go with Hayden to the island. He knew the volcano like the back of his hand and sometimes spent the whole day with us, exchanging knowledge about the volcano.

The victims and friends and whānau of those affected by Whakaari will always be in my thoughts and drive me to improve our systems and science.

I have collaborated with scientists from all over the world on Whakaari and always worked closely with GNS Science. Our focus was to understand the volcano, how and why pressure builds up and rocks explode, rather than on making risk management decisions. The focus of GNS Science teams was to work out how to better monitor the volcano, especially when pressure was building or magma was rising.

I have asked several of my friends at GNS Science why they do their job and their response is “to save lives”. They use the most up-to-date science to monitor New Zealand’s volcanoes, and I use their publicly available reports to inform my decisions when visiting volcanoes with colleagues or students.

I have made more than ten trips and knew we were increasing our risk of getting caught in an eruption. Each visit was another role of the dice, although we never entered the crater if there was a “heightened volcanic unrest” alert.

The volcano erupted several times during the time I was studying it. I consider myself lucky that I was never on the island when it erupted. During 2012 and 2013, we decided the volcano’s elevated activity meant the hazard was too high to risk a visit.

Whakaari is like a very old kettle that has been left on. Steam and boiling water leak out through cracks and holes, but some are occasionally blocked by gunk. Monitoring an old kettle in a constant state of boiling is tricky. Even the best science could never be clear which day or exactly how an old kettle might crack.

As scientists, we try to understand and value the old volcano better. We analyse the patterns of earthquakes by filtering out the constant bubbling. We collected rock samples to measure the chemistry of the minerals to work out blockage conditions.

The need to reflect on what happened

Whakaari is a beautiful and sacred volcano, considered an ancestor by local iwi. Over the years, after each eruption, more data showed more clues to how it works. Some of the boiling signals sometimes showed patterns before eruption. The temperatures and pressures of when minerals caused blockages could be calculated.

We could map where the hot gas, ash and flying rocks would go during eruptions. But every eruption was a bit different. Sometimes steam and tiny bits of magma would come flying out, sometimes only steam and broken rocks.

These subtle differences made it very hard to come up with a model that could forecast eruptions. In an always active system, small changes are hard to detect, and even harder to use to predict the next eruption.

I do get choked up looking back at my photos of Hayden grinning proudly and pointing out different volcanic features of Whakaari. But I know that our research does contribute to better interpretation of volcanic monitoring and to the global research databases that help emergency managers make decisions that save lives every year.

One day, eruption forecasts will be more useful thanks to this research, but it will never be 100% safe to visit an active volcano. As a volcanologist, I don’t know how society should handle risky activities.

I know there will be times in the future where I would consider the risk acceptable for me to return to Whakaari. I also know my wife will never want to get close to an active volcano again after what happened at Whakaari.

This article was originially published on The Conversation.