Astronomers have captured the first image of a black hole, heralding a revolution in our understanding of the universe’s most enigmatic objects, and proving the University of Canterbury’s Canterbury Distinguished Professor Roy Kerr’s 56-year-old solution correct. 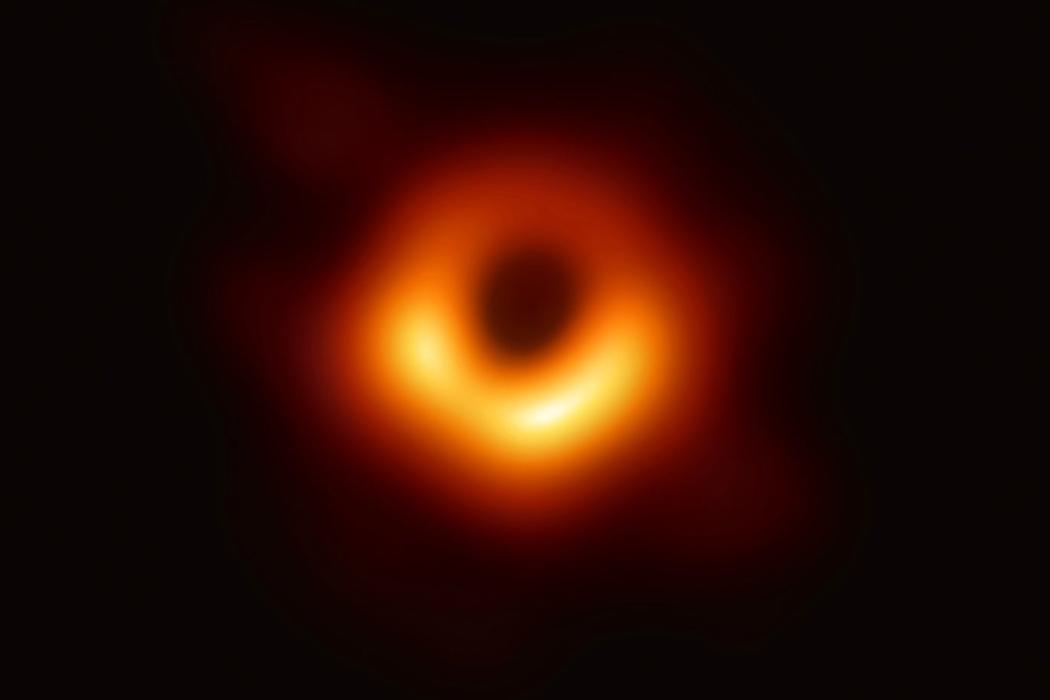 The image of a black hole captured by the Event Horizon Telescope. Photograph: EHT Collaboration

Astronomers have captured the first image of a black hole, heralding a revolution in our understanding of the universe’s most enigmatic objects, and proving the University of Canterbury’s Canterbury Distinguished Professor Roy Kerr’s 56-year-old solution correct.

The picture shows a halo of dust and gas, tracing the outline of a colossal black hole, at the heart of the Messier 87 galaxy, 55-million light-years from Earth.

It is an incredible event for New Zealand science, especially, because it proves UC Canterbury Distinguished Professor Roy Kerr's theory of rotating black holes, which he created more than 50 years ago. The Royal Society of London has described his work as of particular importance to general relativistic astrophysics, and all subsequent detailed work on black holes has depended fundamentally on it.

Canterbury Distinguished Professor Kerr says he set his alarm for 1am to see this very exciting event.

“The EHT photo is just the beginning of a new phase in the understanding of our universe. The visual evidence will continue to get more and more sophisticated,” he says.

“I was surprised that the best image was not Sagittarius A* but was a super massive black hole 2,000 times further away, and 2,000 times larger.”

Back in 1963, before advanced computers existed, with pen and paper Professor Kerr achieved what had eluded others for nearly half a century, solving some of the most difficult equations of physics by hand. He found the exact solution of Albert Einstein's equations that describe rotating black holes.

Professor Kerr's discovery sparked a revolution in physics. At that time there was no consensus that such objects even existed; the term ‘black hole’ was only coined in 1967.

The 2016 discovery of gravitational waves (caused by colliding black holes) by researchers with the Laser Interferometer Gravitational-Wave Observatory (LIGO) was made possible by Kerr's solution.

Dr Kerr returned to New Zealand and the University of Canterbury in 1971, where he became a Professor of Mathematics for 22 years until his retirement in 1993. Professor Kerr developed strong links with the department of physics and astronomy, where his seminal work on the Kerr Vacuum provided the basis of much research and teaching.

“We can now create a close-up image of light bending around a 6.5 billion solar mass black hole 55 million light years away. Wow! This discovery, like that of gravitational waves a few years ago, marks another important milestone in understanding the strong gravity of black holes.

“It is also a red letter day for Canterbury Distinguished Professor Roy Kerr, whose solution of Einstein’s equations describes these objects.

“As the abstract of the last of several papers in Astrophysical Journal Letters notes: ‘This measurement from lensed emission near the event horizon is consistent with the presence of a central Kerr black hole, as predicted by the general theory of relativity.’

“This means in future we will not only be able to learn more about the crucial role that supermassive black holes play in the life cycle and ecology of galaxies, but we will be also be able to test the foundations of Einstein's theory of gravity in the most extreme regime possible. It is a great step forward for science.

“More is coming in the next decade as technology finally catches up with general relativity just over 100 years after Albert Einstein conceived it, and over 50 years since Roy Kerr discovered its most important solution.”

One of the world's foremost theoretical physicists famous for his work on black holes, Stephen Hawking, described Kerr's discovery in his celebrated book, A Brief History of Time

Hawking wrote: “In 1963, Roy Kerr, a New Zealander, found a set of solutions of the equations of general relativity that described rotating black holes. These ‘Kerr’ black holes rotate at a constant rate, their size and shape depending only on their mass and rate of rotation. If the rotation is zero, the black hole is perfectly round and the solution is identical to the Schwarzschild solution. If the rotation is non-zero, the black hole bulges outward near its equator (just as the Earth or the Sun bulge due to their rotation), and the faster it rotates, the more it bulges. So ... it was conjectured that any rotating body that collapsed to form a black hole would eventually settle down to a stationary state described by the Kerr solution. In 1970 a colleague and fellow research student of mine at Cambridge, Brandon Carter, took the first step toward proving this conjecture. He showed that, provided a stationary rotating black hole had an axis of symmetry, like a spinning top, its size and shape would depend only on its mass and rate of rotation. Then, in 1971, I proved that any stationary rotating black hole would indeed have such an axis of symmetry. Finally, in 1973, David Robinson at Kings College, London, used Carter's and my results to show that the conjecture had been correct: such a black hole had indeed to be the Kerr solution.”