UC awards the rare honour of the title Canterbury Distinguished Professor to Emeritus Professor Roy Kerr who is also to receive the prestigious Crafoord Prize in Sweden. 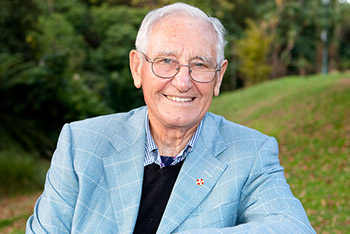 The University of Canterbury is awarding the rare honour of the title Canterbury Distinguished Professor to Emeritus Professor Roy Kerr who is also due to receive the prestigious Crafoord Prize in Sweden this month.

Canterbury Distinguished Professor is the highest academic title that can be awarded by the University Council and has been conferred only twice before in the University’s 143-year history. Title recipients are Nobel Prize winners or equivalent, such as the Crafoord Prize, which is worth over $NZ1 million.

The new appointment makes Professor Kerr the only Canterbury Distinguished Professor in New Zealand. He will attend the Chancellor’s Awards Dinner in November where the honour will be acknowledged and celebrated.

“Professor Kerr was nominated on the basis of winning the highly regarded Crafoord Prize and was therefore considered by the UC Council to be an eminently appropriate recipient of this title. We are extremely proud of Professor Kerr’s long association with the University of Canterbury and all that he has done to increase our understanding of the Universe.”

Dr Wood notes that the Royal Society of London described his work as of particular importance to general relativistic astrophysics, and all subsequent detailed work on black holes has depended fundamentally on it.

“He has made other important contributions to general relativity theory but the discovery of the Kerr black hole was so extraordinary that it is comparable to the discovery of a new elementary particle.”

The Crafoord Prize award ceremony will be held at the Royal Swedish Academy of Sciences in Stockholm on 26 May, in the presence of HM King Carl XVI Gustaf of Sweden, and will be webcast live. The Crafoord Prize in Astronomy prize amount of 6 million Swedish krona (over $NZ1 million) is shared equally between the Laureates.

The previous Canterbury Distinguished Professors were both UC Erskine Fellows: the late Sir Clive Granger, recipient of the Nobel Prize for Economic Sciences, and Robert Grubbs, who was awarded a Nobel Prize in Chemistry.

University of Canterbury Professor of Physics David Wiltshire, who will speak at the Crafoord Prize symposium in Sweden ahead of the awards ceremony, says that Kerr's solution made realising Einstein's dream possible.

“Everything we know about black holes comes from observing accretion disks around supermassive ones. It is for this that Roy Kerr of the University of Canterbury and Roger Blandford of Stanford University share this year's Crafoord Prize in Astronomy from the Royal Swedish Academy of Sciences.”

Back in 1963, before advanced computers existed, with pen and paper Professor Kerr achieved what had eluded others for nearly half a century, solving some of the most difficult equations of physics by hand. He found the exact solution of Einstein's equations that describes rotating black holes.

Professor Kerr's discovery sparked a revolution in physics. At that time there was no consensus that such objects even existed; the term "black hole" was only coined in 1967.

One of the world's foremost theoretical physicists famous for his work on black holes, Stephen Hawking, described Kerr's discovery in his celebrated book, A Brief History of Time.

Hawking wrote: “In 1963, Roy Kerr, a New Zealander, found a set of solutions of the equations of general relativity that described rotating black holes. These ‘Kerr’ black holes rotate at a constant rate, their size and shape depending only on their mass and rate of rotation. If the rotation is zero, the black hole is perfectly round and the solution is identical to the Schwarzschild solution. If the rotation is non-zero, the black hole bulges outward near its equator (just as the Earth or the Sun bulge due to their rotation), and the faster it rotates, the more it bulges. So ... it was conjectured that any rotating body that collapsed to form a black hole would eventually settle down to a stationary state described by the Kerr solution. In 1970 a colleague and fellow research student of mine at Cambridge, Brandon Carter, took the first step toward proving this conjecture. He showed that, provided a stationary rotating black hole had an axis of symmetry, like a spinning top, its size and shape would depend only on its mass and rate of rotation. Then, in 1971, I proved that any stationary rotating black hole would indeed have such an axis of symmetry. Finally, in 1973, David Robinson at Kings College, London, used Carter's and my results to show that the conjecture had been correct: such a black hole had indeed to be the Kerr solution.”

The recently announced discovery of gravitational waves (caused by colliding black holes) by researchers with the Laser Interferometer Gravitational-Wave Observatory (LIGO) was made possible by Kerr's solution. About 1.3 billion years ago two black holes in a distant galaxy collided to form a black hole rotating at two-thirds of the maximum possible predicted by Kerr, and LIGO caught the signal. Researchers now use supercomputers to model such collisions but without Kerr's solution that modelling would be impossible.

UC has appointed five Distinguished Professors since promotions to the rank began in 2013; most recently marine ecologist David Schiel in 2015. He joined UC Distinguished Professors: Jack Copeland, who researches the philosophy of computing and cognitive science; Niki Davis, an expert in e-learning; Mike Steel, a mathematician who researches how life on Earth began; and Geoff Chase, a mechatronics engineer at the forefront of medical decision support research.