The Royal Swedish Academy of Sciences has decided to award The Crafoord Prize in Astronomy 2016 to Professor Roy Kerr. 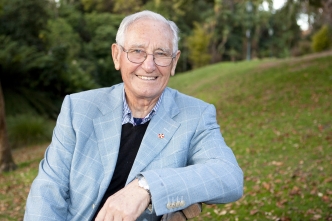 Black holes are the origin of the universe’s most powerful light, with rays that can stretch many thousands of light years out into space. Roy Kerr created one of the most important tools in modern astrophysics and cosmology early in his career, when he discovered a mathematical description of rotating black holes before anyone had even seen them.

Black holes are the strangest result of the general theory of relativity. When Albert Einstein finally presented his theory in November 1915, he described gravity as a geometric property of space and time, spacetime. All massive space objects bend spacetime; they create a pit into which smaller objects can fall. The greater the mass, the deeper the pit. The mass of a black hole is so great that nothing that ends up in there can escape, not even light.

It took until 1963 for someone to solve Einstein’s equations for black holes that could possibly be found in the universe – rotating black holes – and it was mathematician Roy Kerr who succeeded. At about the same time, astronomers discovered galaxies that emitted light that was so strong it outshone several hundred ordinary galaxies. They were named quasars. Nothing other than a black hole could give the quasars their luminosity.

So how is the strong light of rotating black holes created? This question was answered by Roger Blandford in 1977. Ever since, he has refined and made more realistic models of how gas surrounding a black hole flows towards it, is heated up and transforms some of its gravitational energy to radiation.