University of Canterbury Emeritus Professor Roy Kerr has become the first New Zealander to be awarded the Einstein Medal by the Albert Einstein Society in Switzerland. 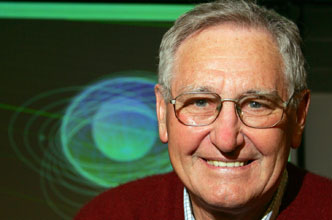 University of Canterbury Emeritus Professor Roy Kerr has become the first New Zealander to be awarded the Einstein Medal by the Albert Einstein Society in Switzerland.

Professor Kerr has earned the award for his 1963 discovery of a solution to Einstein's gravitational field equations. The Kerr Solution, as it has come to be known, provides an exact description of the space outside a rotating black hole. With over 100 million trillion black holes in the observable universe, his achievement has been of crucial importance for science.

The Kerr Solution has come to be regarded as the most important exact solution to any equation in physics and has been pivotal in understanding the most violent and energetic phenomena in the Universe.

The medal is awarded annually by the Einstein Society, which is based in Bern, Switzerland, where Einstein completed his revolutionary work in the first decade of the 20th century.

The Einstein Society works with the University of Bern to preserve Einstein's legacy in Bern and Switzerland through different activities and in particular by annually awarding a medal "to deserving individuals for outstanding scientific findings, works, or publications related to Albert Einstein".

"Our own galaxy contains a black hole of over four million solar masses, as deduced from the motion of nearby stars. In other galaxies measurements of X-rays emitted by matter falling into central black holes show that they are often rotating at close to the maximum rate allowed by the Kerr solution.

"Increasingly, we are discovering that the interaction between central black holes and nearby matter is essential to understanding the origin and evolution of galaxies. Roy's solution is key to all of this,’’ Professor Wiltshire said.

The Einstein Medal will be awarded to Professor Kerr at a ceremony at the University of Bern in May next year.