In a significant advance in engineering, New Zealand's newest overpass features a world-first in quake-resilient technology described as the "Ferrari" of bridges. 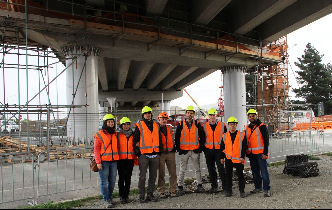 In a significant advance in engineering, Christchurch’s newest overpass features a world-first in quake-resilient technology described as the “Ferrari” of bridges, developed in Christchurch by University of Canterbury engineers.

The innovative, seismically resilient connections at the bridge piers of the new $30 million Wigram-Magdala Link overbridge project are engineered to minimise post-earthquake damage. This is understood to be the first bridge in New Zealand and the world to adopt this low-damage technology. Scheduled to open this week, the overbridge is 100 metres long, consisting of three spans over two piers, and passes over Curletts Road in Middleton, Christchurch.

“The engineering design incorporates novel dissipative fuses and post-tensioning cables acting as rubber bands to allow the bridge columns to bounce back to the original position and not leaning in one side. The University of Canterbury is the first institution and New Zealand is the first country in the world to have it implemented in a real structure.”

University of Canterbury (UC) research was key to the development of the design, which is a significant advancement in engineering, he says.

“This bridge can be seen as the Ferrari of structures – high performance and safe,” Dr Palermo says.

“In other countries, it might take decades to see the first implementations of this technology. This fact highlights the fact that New Zealand engineers and researchers are world leaders in earthquake engineering innovation.”

The collaboration came about from interaction through the Canterbury Bridge Group, an initiative by UC to provide stronger links with the industry. Visits to observe the testing research at UC led to the concept of low-damage detailing being incorporated into the Wigram-Magdala Link overbridge, with support from the Christchurch City Council.

This technology has been embraced by the building industry for new commercial structures around Christchurch and elsewhere in New Zealand and presents a shift in design focus considering the ability to repair a structure following an event, allowing more rapid and low-cost reinstatement, plus significantly reducing disruption.

The design concept comes from a strong experimental campaign and research development at UC under Dr Palermo’s leadership. His bridge group investigated different bridge columns, detailing and comparing their performance under seismic loading. He also consulted the local industry, through the Canterbury Bridge Group, inviting them to witness the experiments in the UC engineering laboratories and explaining the mechanics behind the technology.

“This process certainly helped to educate the client and the designer to this new revolutionary system,” Dr Palermo says.

“The asset owner, Christchurch City Council, and the designer, Opus International Consultants, felt that that such a critical bridge for the city should incorporate innovative technology to minimise post-earthquake damage and therefore also potential traffic disruption. UC and local professionals are working together to improve current design philosophies and deliver the next generation of structures which can experience several earthquakes with limited or no damage.”

The design was conceived to provide enhanced seismic resilience to this structure which provides an important link between the growing southwestern suburbs of Christchurch and the city centre, passing over SH73 Curletts Road which is also of strategic importance, according to Christchurch City Council’s Transport Planning and Delivery Manager Lynette Ellis.

“Christchurch has led the way with a number of new technologies as part of the earthquake rebuild. It was pleasing to have so many organisations cooperating to make this happen,” she says.

“We look forward to opening the overbridge.”

Opus International Consultants undertook the design of the Wigram-Magdala Link overbridge and engaged UC to provide technical support and verification for developing the low-damage detailing for the bridge. Scaling up from prototypes tested in the laboratory to a structure of this size presented many challenges, including ensuring the design was visually sympathetic. The main contractor, Hawkins Infrastructure, and their specialist subcontractor, Concrete Structures Ltd, have played an integral role in undertaking the construction of this bridge.