UC Associate Professor of Physics Jenni Adams is part of a large-scale scientific mission to understand an intriguing elementary particle, the neutrino. 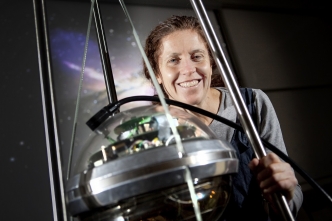 UC Physicist Associate Professor Jenni Adams with one of the thousands of sensors that make up the massive IceCube neutrino detector in Antarctica.

University of Canterbury Associate Professor of Physics Jenni Adams is part of a large-scale scientific mission using an intriguing elementary particle, the neutrino, to understand the highest energy processes in the Universe.

At the IceCube experiment in Antarctica, Assoc Prof Adams and her colleagues use a mountain-sized telescope, embedded deep in the ice, made up of more than 5000 sensors to detect the elusive particle. These sensors are embedded deep in the ice at the South Pole to enable detection of neutrinos, which are nearly massless subatomic particles.

“We’re after neutrinos that come from the highest energy regions of the Universe, and they have probably a million to a trillion times the energy than the neutrinos produced in radioactive decays, or from the sun,” Assoc Prof Adams says.

“There are cosmic rays [charged particles] that have a million times energy than anything we’ve ever created on Earth and actually likely to ever be able to create. We would love to know where these charged particles come from… It might be something like an exploding star or objects devouring other objects or something we don’t yet know … We know there’s something out there producing all of this energy — but we don’t know what it is or where it is.”

The UC IceCube research group is supported by a grant from the Marsden Fund Council from Government funding, managed by the Royal Society of New Zealand.

At TEDxChristchurch, she explained how IceCube works: