Saving kauri trees, addressing disease and slowing the progress of cancer or MS are all future possibilities thanks to new technology called laboratory-on-a-chip. 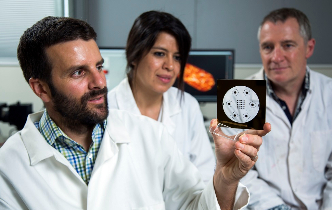 Saving kauri trees, detecting bacteria in milk, addressing disease and infection and slowing the progress of cancer or multiple sclerosis are all future possibilities thanks to new technology called laboratory-on-a–chip.

Dr Volker Nock is a Principal Investigator in UC’s Biomolecular Interaction Centre, a multi-disciplinary centre dedicated to the study of molecular interactions critical to biological function.

On a chip the length of a thumb, he has developed a platform for studying the mechanics of microorganisms. His most recent research has come about thanks to collaboration with UC biochemist Dr Ashley Garrill, whose fields of research include biochemical and biophysical processes that underlie growth and development and the morphogenesis and pathogenicity of fungi.

The team’s work has important implications for understanding how fungi and oomycetes grow as pathogenic species on plants and animals.

One of the products of the vegetative growth of fungi and oomycetes are protrusive forces generated by the tip of the growing hyphae. This aids in the invasion of crops or other living organisms.

The lab-on-a-chip platform is able to measure these forces and determine factors that underlie them.

Understanding the invasive capabilities of these organisms is the first step on the path to eventually knowing how to interfere with, or supress their protrusive force.

“Lab-on-a-chip is an area where New Zealand can compete internationally. We have a strong biological sector. We can respond here first in this country, and from there, deliver solutions to the world.”

Previously, Dr Nock collaborated with Associate Investigator at the MacDiarmid Institute, Dr Wenhui Wang, who is now at the Department of Precision Instruments at Tsinghua University, in Beijing. Dr Nock’s research into force patterns in biological microorganisms originated from Dr Wang’s work into increasing the rate of success for in-vitro fertilisation, he says.

In collaborating with Dr Wang, Dr Nock had access to nematodes, a neurologically simple, highly adaptable worm species used as a model organism. Being transparent, it is possible to see the internal organs and structure of the worms. As part of the project, Dr Nock developed a system where he could measure the force of a nematode when it moved.

“If you can measure the force of a nematode with normal behaviour and then measure the force when you stimulate it, such as with light or electricity, you have taken a step in figuring out how one very simple organism will react. Will it for instance modify its system?”

Dr Nock was integrally involved in perfecting the experimental environment, where small flexible pillars on a chip provide the tool to measure the force response of an organism.

The problem with working with the nematodes is that existing mutants with interesting behavioural traits were difficult to import into New Zealand. A further problem for the team of engineers was that at UC there were no biologists who were driving this work.

Laying the groundwork for the future

The answer came when UC’s Dr Ashley Garrill approached him to see if there might be an application for his work with fungi.

Dr Garrill was researching how organisms growing on a plant try to penetrate the host organism. This involves understanding how they generate a force to penetrate the plant cells. The work is highly topical as it may unlock secrets around potato blight or kauri pit-fruit disease.

In turn this ability to measure forces could have applications for human disease, says Dr Nock.

“We are laying the ground work for future potential capability. For example, people have observed that cancer cells are very susceptible to the mechanics of the environment they grow in.

“It is in no way conclusive yet, but hypothetically if you were to expose cancer cells to mechanical forces they might revert back to something that looks like the behaviour of a normal cell. This is very exciting since we have the fabrication techniques at UC for producing labs-on-a-chip, which may offer the possibility of looking at what mechanical forces cells experience in certain tissues and expose them to a whole range of mechanical stimuli.”

“As an engineer and a biologist we often respectively think of different ways to tackle the same problem and to then interpret the results. This can lead to synergies in the research lab that would be unlikely to happen without collaboration. For example, an important aspect of the lab-on-the-chip that makes it so successful is how the design of micro-pillar arrays are optimally positioned for hyphae to grow into them.”