A newly released book by a UC academic examines the experiences of workers and managers from a broad array of human service organisations in post-earthquake Christchurch. 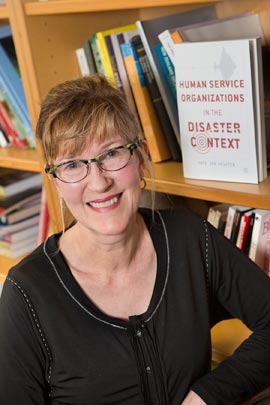 A newly released book by University of Canterbury’s Associate Professor Kate van Heugten (Human Services) examines the experiences of workers and managers from a broad array of human service organisations in post-earthquake Christchurch.

The work draws on confidential interviews with sources working to support communities in post-earthquake Christchurch, and integrates this with international literature to analyse the challenges and opportunities that arise for such organisations after large-scale disasters.

The book developed out of a previous work, looking at stress, fatigue and burnout in the workplace, on which she was working when the Canterbury earthquakes began.

"Essentially, the idea for new book arose from a chapter in the first one,” van Heugten says.

"Talking to those working during the response really puts a human face on recovery efforts and draws the issues and opportunities into stark relief in an engaging way. These are people who are doing the absolute best they can for individuals, families and communities, often at times of considerable stress in their own personal situations.

"It is very clear that these people play a very valuable supportive role. Often, they are more effective because of their own personal motivations to help, which keep them going—but it is also very clear that they need to be very well supported to remain effective over any period of time.

"The human service organisations in which these people are employed advocate for communities, champion social justice, and help ensure that vulnerable people are not left isolated. They are a key driver of recovery, individually, as communities and as a region."

Van Heugten says her book is an academic text and uses the experiences of Christchurch workers as a case study to make the literature and theory on disaster responses accessible to readers. She does not intend the book to be a criticism of local earthquake recovery efforts—though some might see it that way.

Her participants’ commentaries reach beyond descriptive accounts of their own work, to more analytic commentaries about the need for collaborative rather than top-down approaches to emergency interventions and about the impacts of poverty and discrimination on long-term community recovery. While some recovery and community wellbeing needs were well catered for and funded, others were reported to be overlooked or sidelined.

"There will always be a range of views about what works and what doesn’t after a disaster. This book relies on qualitative research and international literature to develop theory. Qualitative research makes clear comparisons difficult, but it does offer observations about things that are internationally identified as being absolutely necessary--such as attention to the views of local communities and to the provision of affordable social housing.”

Van Heugten’s book also offers insights into educational needs of people working in human services to enable them to be better prepared to work in post disaster contexts.

She says there are multiple strands in a disaster response—involving local and national governments, public and nongovernmental social service organisations, community groups, and volunteers. Internationally, there are different social welfare funding systems and the way these are used can have an impact. Every decision comes with opportunities and costs, and each community is different. But when social and economic disparities become great, the costs begin to fall unequally on vulnerable people, including on children
living in poverty, resulting in negative social consequences.

"Even with the best intentions, you can’t plan a foolproof strategy for when the worst happens, but you can plan and make provisions that will be useful when it does, though you still need flexibility and the ability to anticipate and adapt. That applies to individuals as much as it does to organisations of any sort.

"UC is very aware it has a major role in earthquake recovery and in the future of Christchurch, Canterbury, and New Zealand. There are many kinds of community supportive research being done on campus including initiatives that have begun because of the earthquakes. It’s pleasing to be able to contribute to that broad array of work," van Heugten says.