Christchurch City Council contractors have uncovered standing kahikatea stumps, which will be subject to radiocarbon dating to establish their age. UC students – led by fossil plant specialist Dr Matiu Prebble – plan to explore the site to understand what has caused the demise of the buried forest. 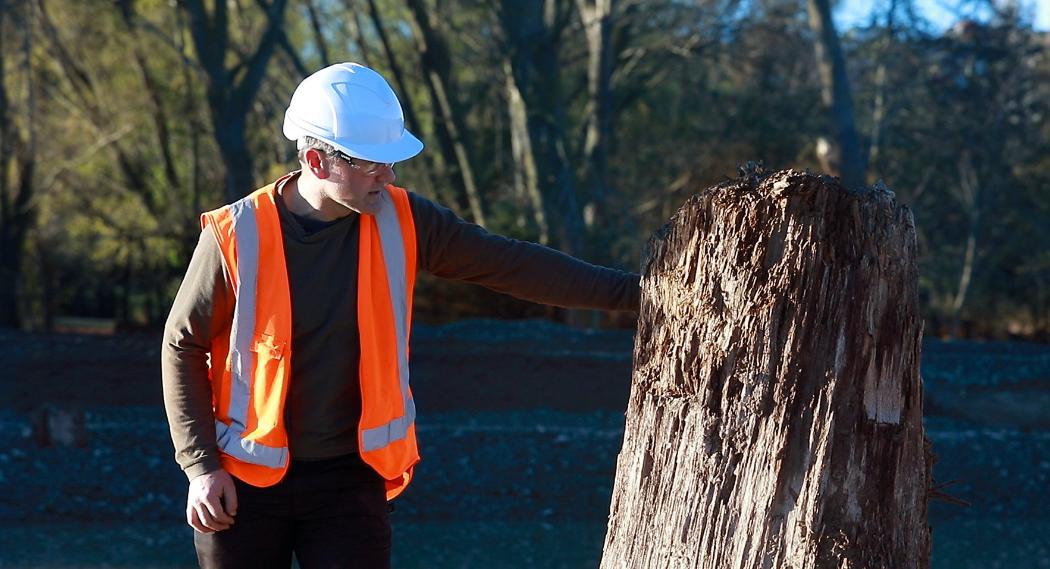 Workers have discovered tree stumps from an ancient forest in the Hoon Hay Valley.

Christchurch City Council contractors have uncovered the stumps while carrying out flood mitigation work, which will reduce flood risk along the Heathcote River, at a new storm-water retention basin in Cashmere Road.

The standing kahikatea stumps will be subject to radiocarbon dating to establish their age. However, previous analyses of buried wood in Hoon Hay suggests that they may be about 2500 years old.

A University of Canterbury (UC) study will now seek to understand what has caused the demise of the buried forest.

UC students – led by fossil plant specialist Dr Matiu Prebble – plan to explore the buried forest site, along with another found in the Longhurst development in Halswell.

“With the recent flood mitigation programme, more of these buried standing stumps are being located,” he says. “The changing course of the Waimakariri River likely led to the flooding of many – but not all – of the buried standing forests.”

Dr Prebble will investigate whether the new finds have fallen victim to floods or early logging.

“We will need to date seeds, not just wood from the extracted stumps, which may have been sitting in the ground for a long time,” he says.

Dr Prebble hopes to learn whether the fossil data can provide a baseline for ecosystem restoration.

“We have identified seeds and leaves of several species and this data can inform environmental restoration projects into the future,” he says.

The project also aims to identify areas utilised by Māori prior to European arrival, and those forests cleared by early settlers.

“The project is of personal interest as both my Māori and Pākeha ancestors lived in this area in the mid-19th century,” Dr Prebble says.

“My Prebble ancestors had the original pastoral lease of the Halswell/lower Hoon Hay area during the 1850s and may have been responsible for the clearance of any surviving standing forests.”

Research data from the two sites will be compared with that of the surviving kahikatea forest in Pūtaringamotu/Riccarton Bush, near the UC campus.

The stumps will remain in place as Council contractors plant thousands of native trees and plants to help restore the Hoon Hay Valley area.

Work in the valley basin will also improve water quality in the Cashmere Stream by removing sediment from the area.