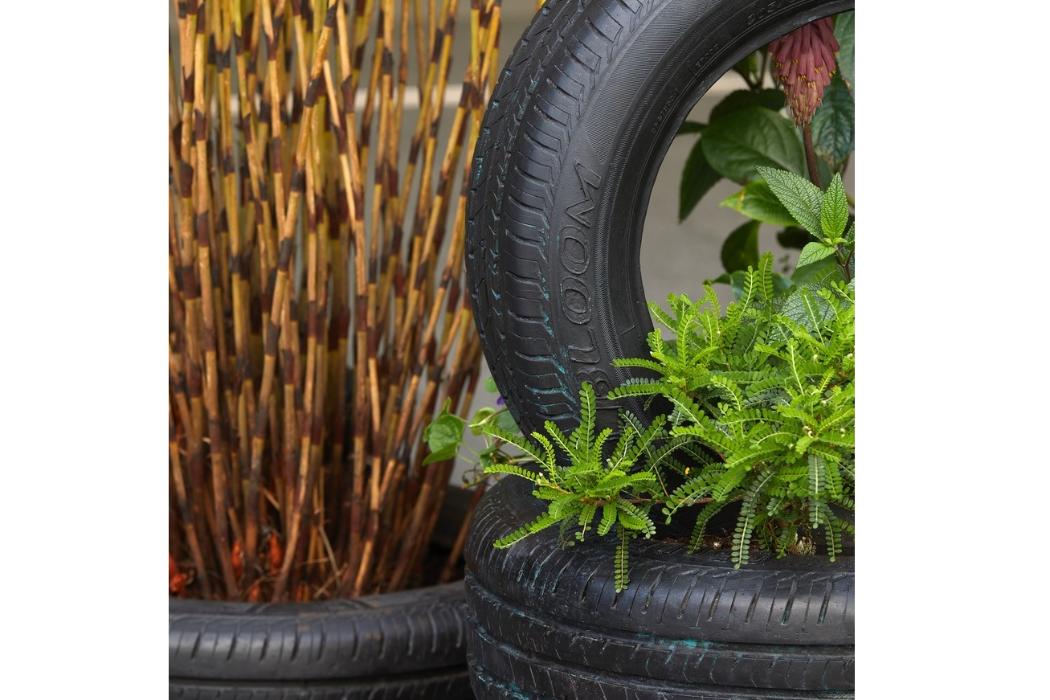 Carr was on a residency at McCahon House in Titirangi when New Zealand’s first COVID-19 lockdown was announced. Then, as Auckland emerged from its second stint at Alert Level 3, he created a significant new sculpture that refers to the possibilities of a post-COVID-19 future, as well as some of his favourite artistic themes from his past.

The new artwork, entitled In Bloom and funded by Creative NZ with support from Britomart and UC, was installed last week and will remain in place until late November. It is made up of three stacks of what look like old car tyres, but are quickly revealed upon closer inspection to be bronze replicas. The tyre stacks have been made into gardens by landscape architect Jared Lockhart, transforming them to vessels that contain the promise of new life and possibilities.

It’s a work Carr has wanted to make for some time, but has taken on evocative new meaning in a COVID world. It’s the transformation of something mundane into something remarkable, with its plantings referring to the passing of time and the onset of the new growth of spring.

In Bloom continues Carr’s interest in boy racer and car culture, notably in his 2009 short film Burnout, a five-minute epic in which a car on a west Auckland street pulls a massive burnout and fills the street with beautiful slow-motion smoke.

The work also has strong thematic connections with Transpiration, part of Carr’s 2014 solo exhibition at the Dunedin Public Art Gallery, a work in which a 30-metre video wall features carnations in a myriad of pastel shades opening in minuscule moments on an eternal loop.

In Bloom, which was fabricated by bronze caster Matthew Williams in his Christchurch foundry, also speaks of Carr’s interest in materials, and the transformation of a humble tyre into something of much greater value when rendered in bronze. The bronze, however, has acquired a black patina, which means the tyre stacks will look like the real thing at first glance.

“These tyres are about motion that has been cast and frozen,” Carr says, “and they’re paired with flowers that are constantly moving.”

His time at McCahon House in lockdown was essential to the realisation of the work, Carr says. He first discussed the possibility of the work with Williams almost five years ago, but it wasn’t until the McCahon House residency that he had the idea of planting within the tyre stacks and felt the idea was sufficiently resolved.

“The tyres reference boy racers or family trips or the puncture you get on Christmas Day,” Carr says, “and the flowers make me think of tyres you have in gardens that are often painted in bright colours and filled with herbs.”

The sculpture is situated at the end of Britomart’s Atrium on Takutai as it opens onto Takutai Square, on the same axis as the cone-shaped skylights that lead through Takutai Square and down Te Ara Tahuhu to the western entrance of the Britomart Transport Centre.

“We didn’t intend the sculpture to be a ‘welcome back’ gesture in the precinct,” says Britomart’s Jeremy Hansen, “but it seems fitting that it’s turned out this way. We hope it’s something that makes visitors pause and reflect on the experience of lockdown and the promise of spring in a challenging year.”