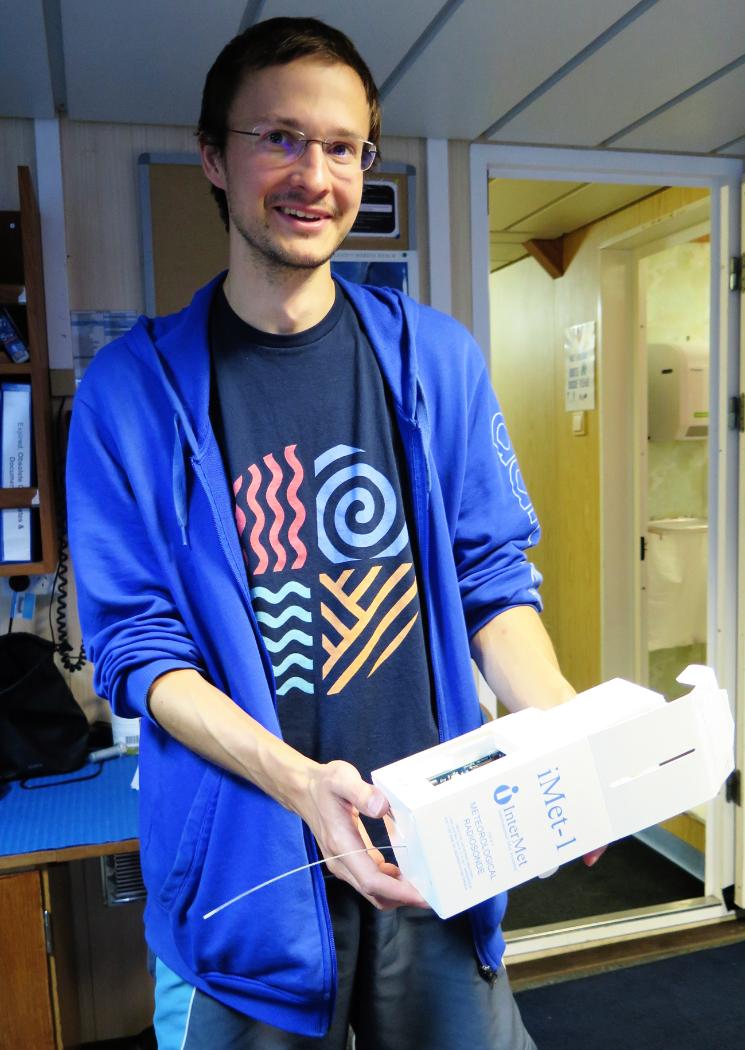 He says clouds are important because they regulate how much solar radiation reaches the earth’s surface, and also absorb thermal radiation from Earth.

They can play a warming or cooling role depending on their altitude, shape and density.

“Clouds are the biggest uncertainty for the models used when calculating climate change and the Southern Ocean is an area where they struggle the most,” Kuma says.

“It’s one of the world’s most inaccessible places so accurate measurements of clouds there have been hard to get and are usually based on satellite information, which misses lower level cloud.

“It can’t be seen from space because it’s obscured by higher level cloud so having more accurate measurements from the ground is vital.”

Kuma was on the research vessel Tangaroa that visited the Campbell Plateau for two weeks in 2017, and spent six weeks in the Ross Sea in 2018, along with other UC and National Institute of Water and Atmospheric Research (NIWA) scientists.

They used instruments such as lidars (laser "radars") and weather balloons to probe the atmosphere, collecting a wealth of highly-detailed information about the structure and physics of clouds in a largely unknown region.

The project, led by Director of Gateway Antarctica UC Professor Adrian McDonald, was a collaboration between UC, NIWA, the Australian Antarctic Division, University of Colorado, Boulder and the New Zealand Defence Force.

Ship-based observations and data collected by the team during three years of study in the Southern Ocean have been analysed and will now help experts to accurately predict the impact of increasing greenhouse gases on the planet.

The information will feed into the development of influential international climate change models used by the United Nations Intergovernmental Panel on Climate Change (IPCC).

Kuma is lead author of an article about the study published recently in the international journal Atmospheric Chemistry of Physics.

The main finding from the team’s research relates to low-lying stratocumulus clouds, which are flat and cover a large area, being the most prevalent in the Southern Ocean during the summer months.

However, most climate change models are based on simulations that feature cumulus clouds, which cover a smaller area but are thicker and more reflective.

They found the New Zealand Earth System Model (NZESM), a climate model based on a British MetOffice climate model in development at NIWA and UC, simulates too few low-level clouds over the Southern Ocean.

Kuma says the ship-based observations will lead to an improved understanding of how these clouds form and provide better accuracy for the models, particularly when they are applied to the Southern Hemisphere.

“The simulations they were using contained relatively large errors which would impact on the accuracy of future climate change predictions, particularly for New Zealand which is close to the Southern Ocean.”

Underestimating cloud cover causes errors that can result in warm sea-surface temperature biases, underestimated sea ice cover and it impacts on the position of the strong winds that circle the Southern Hemisphere.

Kuma is from Slovakia and has been in New Zealand for the past three years. He received a UC Doctoral Scholarship and funding through the Deep South National Science Challenge to complete his PhD in atmospheric physics.

He enjoyed his Southern Ocean experience despite the rugged conditions with waves up to four metres high.

“It’s an exciting place for climatologists to go because it’s a very under-studied place on the globe.”

Surprisingly, unlike many of his colleagues, he didn’t get seasick on the voyages. “I just enjoy being outdoors so for me it felt natural.”