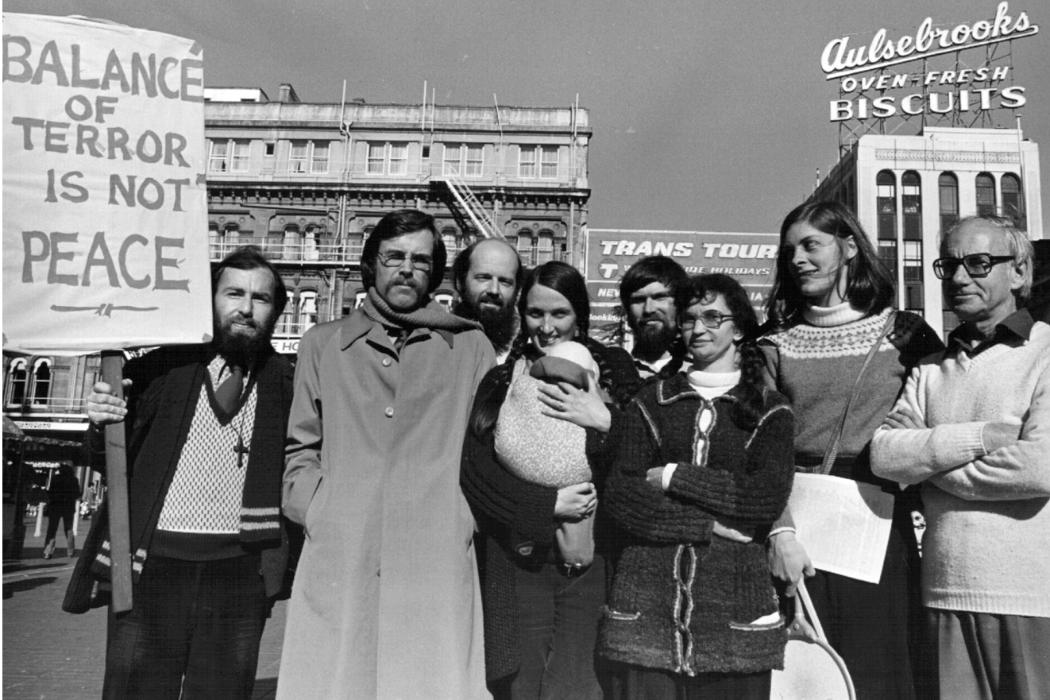 “When Christchurch was declared New Zealand’s first Peace City in 2002, to mark the 20th anniversary of becoming New Zealand’s first nuclear-free city, the collection of peace movement archival material was one of the initiatives adopted by the City Council,” Dr Dewes says.

“The DSC helped source and archive the collections of Harold Evans, Larry Ross and other leading peace and disarmament campaigners to be gifted to the Macmillan Brown Library.”

When the DSC had to move for earthquake repairs in 2014, the University of Canterbury Library helped the organisation relocate over 100 large boxes of documents to safe storage in the Airforce Museum for two years.

“We are gifting our papers earlier than expected as we expect to move out of our home and office again [for re-repairs] and we have PhD and MA students both here and internationally keen to access the papers as soon as possible,” Dr Dewes says.

“The collection provides historical evidence for a critical time in New Zealand’s international relations, and documents the individual contributions of Cantabrians such as Kate Dewes to this period in history and the peace movement. It also relates to the impact of nuclear testing in the Pacific, and the contributions of Pacific Islanders in campaigning against it.”

The Disarmament and Security Centre Collection will be made available to researchers once it has been fully appraised and catalogued on Macmillan Brown Library’s Kā Kohika site.

UC alumna Dr Dewes has been involved in numerous peace and anti-nuclear campaigns since 1975. A former UC lecturer in Peace Studies and currently an Adjunct Senior Fellow in UC’s School of Humanities and Creative Arts (History), she helped successfully campaign for the world’s first national nuclear-free law, known as the New Zealand Nuclear-Free Zone, Disarmament, and Arms Control Act 1987. In 1988, she was part of a New Zealand Government delegation to the Third United Nations Special Session on Disarmament and later advised two UN Secretaries General on disarmament issues.

Dr Dewes was one of the pioneers of the World Court Project which began in Christchurch in 1987. In 1992, she and her husband Commander Green were members of the International Steering Committee coordinating the campaign which led to the historic 1996 advisory opinion by the International Court of Justice in The Hague. It unanimously ruled that the threat or use of nuclear weapons is generally illegal according to international law.

Dr Kate Dewes has co-directed the Christchurch Disarmament & Security Centre (DSC) with her husband Robert Green since 1998. Dr Dewes has been involved in numerous peace and anti-nuclear campaigns since 1975. She was on the International Steering Committee for the World Court Project; a member of the Public Advisory Committee on Disarmament and Arms Control; lecturer in Peace Studies at the University of Canterbury for 20 years; the New Zealand government expert on the UN Study on Disarmament and Non-Proliferation Education 2000-2002, and a member of the UN Secretary-General’s Advisory Board on Disarmament Matters 2008-2013.

Robert Green served for 20 years in the British Royal Navy from 1962-82. As a bombardier-navigator, he flew in Buccaneer nuclear strike aircraft and then anti-submarine helicopters equipped with nuclear depth-bombs. On promotion to Commander in 1978, he worked in the Ministry of Defence before his final appointment as Staff Officer (Intelligence) to the Commander-in-Chief Fleet during the 1982 Falklands War. Robert Green chaired the UK affiliate of the World Court Project (1991-2004) and he is the author of Security Without Nuclear Deterrence.