Like some confused migratory bird, a jumbo jet containing NASA’s flying observatory leaves its sunny home in the California desert every year to spend the winter in Christchurch, New Zealand. 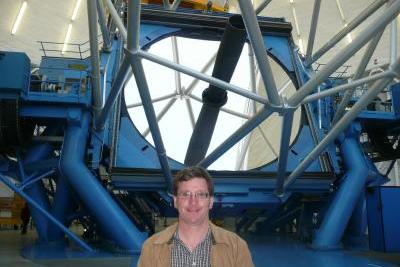 Dr Stuart Ryder in front of one of the twin 8.1-metre Gemini telescopes located on Cerro Pachón, Chile.

Like some confused migratory bird, a jumbo jet containing NASA’s flying observatory leaves its sunny home in the California desert every year to spend the winter in Christchurch, New Zealand.

In a free public talk, Tuesday night at the University of Canterbury, join New Zealand-born astronomer, UC alumnus Dr Stuart Ryder as he explains why making astronomical observations from 45,000-feet is worth the effort, and what it’s like to fly with NASA on board SOFIA.

The Stratospheric Observatory for Infrared Astronomy (SOFIA) is a heavily-modified Boeing 747SP aircraft with a 2.5-metre telescope located inside the rear-half of the fuselage.  The primary science objectives of SOFIA are to study the composition of planetary atmospheres and surfaces; to investigate the structure, evolution and composition of comets; to determine the physics and chemistry of the interstellar medium; and to explore the formation of stars and other stellar objects.

Currently based at Christchurch International Airport, the SOFIA aircraft is usually based at NASA’s Armstrong Flight Research Center in Palmdale, California, in the United States. The SOFIA Program Office is at NASA Ames Research Center in Moffett Field, California, which manages SOFIA’s science and mission operations in collaboration with DLR, the German Aerospace Center.

Dr Stuart Ryder grew up in Dunedin, and earned his BSc Honours degree from the University of Canterbury before completing a PhD in astronomy at the Australian National University. He is currently an Adjunct Fellow with the Department of Physics & Astronomy at Macquarie University in Sydney, and flew two missions on SOFIA in 2016 observing a collapsing star-forming cloud in Carina. He is a Program Manager with Astronomy Australia Ltd, overseeing Australia’s Strategic Partnership with the European Southern Observatory (ESO). He has used a number of optical/infrared telescopes including the Anglo-Australian Telescope, the Gemini Telescopes, the ESO Very Large Telescope, the Keck and Subaru Telescopes, as well as radio telescopes to study core-collapse supernovae, and now heads a ground-breaking study of the host galaxies of Fast Radio Bursts.