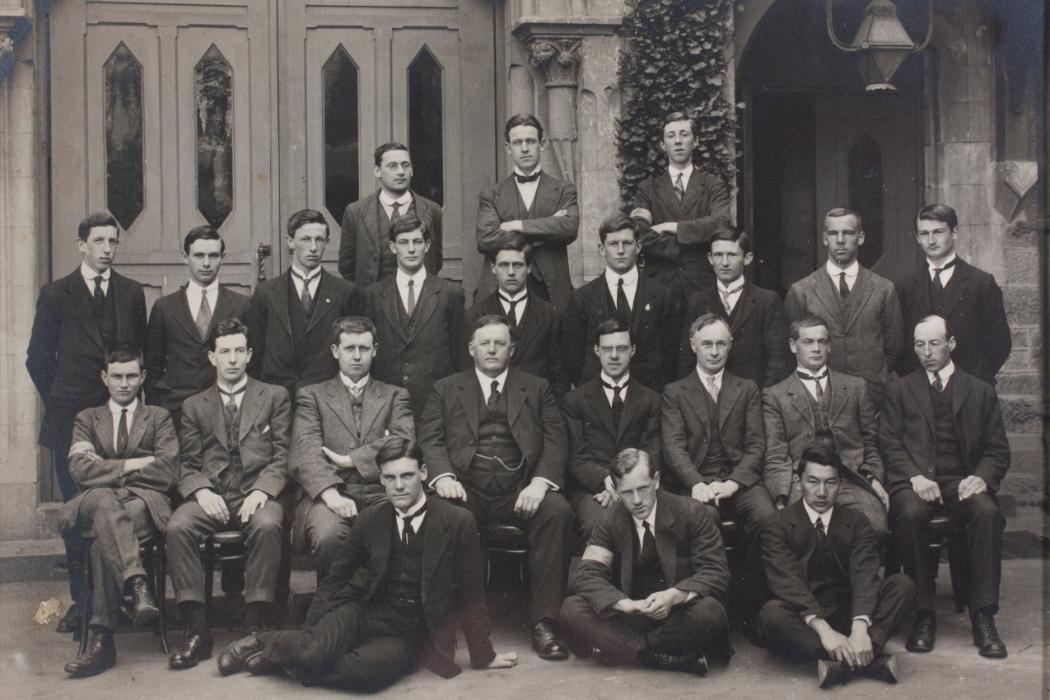 Almost exactly 100 years ago, New Zealand troops based at Sling Camp in England rioted. To keep the soldiers occupied after the riot, a 128-metre-long kiwi – surveyed by a Canterbury engineering student and ANZAC soldier – was carved into the chalk hillside above the camp, where it remains to this day.

Sergeant Major Victor Low, who was an engineering student at Canterbury University College (now the University of Canterbury) served in World War I, following in the trailblazing footsteps of his big brother, Norman.

Norman Kwong Tsu Low (English spelling varies), became the first person of Chinese descent in New Zealand to graduate from university, when in Christchurch in 1909, he graduated from Canterbury as an engineer (BE [Elect]). His younger brother, Victor, followed him to study engineering at Canterbury and both joined the army during the First World War.

Born in Dunedin in 1887, Norman was the second son of the well-known Lo Keong family – regarded as the first Chinese family to settle in New Zealand. After Norman graduated from Canterbury University College, he worked in London as a civil engineer before enlisting in the NZEF’s British Division in 1914 at age 27. (He gives his age at enlistment as 27 11/12 years, which suggests he was born in October 1887.)

He was sent to Gallipoli on 12 April 1915, arriving sometime around 25 April, and is believed to be one of only a few New Zealand-Chinese soldiers who fought at Gallipoli. It appears that he left Gallipoli for England on the 17 September 1915. Hospitalised in Malta, he went on to serve in Egypt and France. He was gassed in the later Somme offensives and returned to New Zealand on the SS Hororata in early 1919. In total, Norman served abroad for four and a half years.

Both brothers seem to have been in Sling Camp in 1919.

Like his big brother, Victor Thomas Low studied engineering at Canterbury University. A member of the Civil Service Rifles in Christchurch, he was listed as a civil engineer when he enlisted in 1917 and was in the NZ Engineers Tunnelling Company sent to Europe in April 1917.

Victor was a “nice joker” who “smoked like a chimney,” according to historian Dr James Ng’s research [Windows on a Chinese Past, vol 3, p. 349.]. As a member of the New Zealand Engineers Tunnelling Corps, Victor was attached to the Third Army, which defended Arras during the German Spring offensive and then fought in the Second Battle of the Marne in July 1918. He was hospitalised with influenza towards the end of 1918.

While Victor was in the Army Education Unit as a sergeant, restless New Zealand troops who’d been kept waiting months to board a ship for the six-week voyage home, rioted at Sling Camp on 14 and 15 March 1919.

The idea of constructing a lasting memento of the New Zealanders’ occupation of Sling Camp was raised. After the riots, the British Army permitted the construction of a kiwi on military land on nearby Beacon Hill. The work was intended to keep soldiers occupied while they waited to go home.

Victor is the soldier who mapped out the iconic chalk kiwi on Salisbury Plain in 1919, surveying the shape on a steep hill, which meant working out the carved proportions to gain the right perspective for the viewer.

According to historian Colleen Brown: “It was a difficult job, as the hill had a 10-degree slope and there was an irregularity in the centre. The chalky soil was similar to that at Arras, with which Victor was familiar.

“Once he was certain he had it absolutely correct, the soldiers cut the kiwi by hand ... The soil was dug out to a depth of 30 centimetres, exposing the chalk beneath. The kiwi is 128 metres long, with its beak extending 45.7 metres and the ‘NZ’ letters standing 20 metres high. The work was completed on 28 June 1919, the day the Treaty of Versailles with Germany was signed.”

Victor survived the war and later joined his brother Norman in Shanghai. Sadly, due to the effects of being gassed in the Somme, Norman died in his mid-30s, and was buried in 1921 in Shanghai (photo of his grave headstone here).

When Victor was demobilised from the army he travelled to Hong Kong, where he worked for many years for an architectural firm. Victor and his wife Emily left Hong Kong in 1941 shortly before the Japanese attacked the island, travelling through China to Chungking and into India before returning to New Zealand in 1943. Back in New Zealand, Victor worked for the Ministry of Works in Wellington, where he died on 11 May 1953, aged 59.

The ANZAC legacy the ground-breaking Low brothers left behind lives on. The giant kiwi carved into a hillside in southern England has recently been recognised for its historic significance.