Earlier this month, a rocket blasted off from the Waikato countryside, firing up through the clouds to an altitude of 31,000 feet – carrying with it the first biological experiments launched and recovered from a rocket in New Zealand. 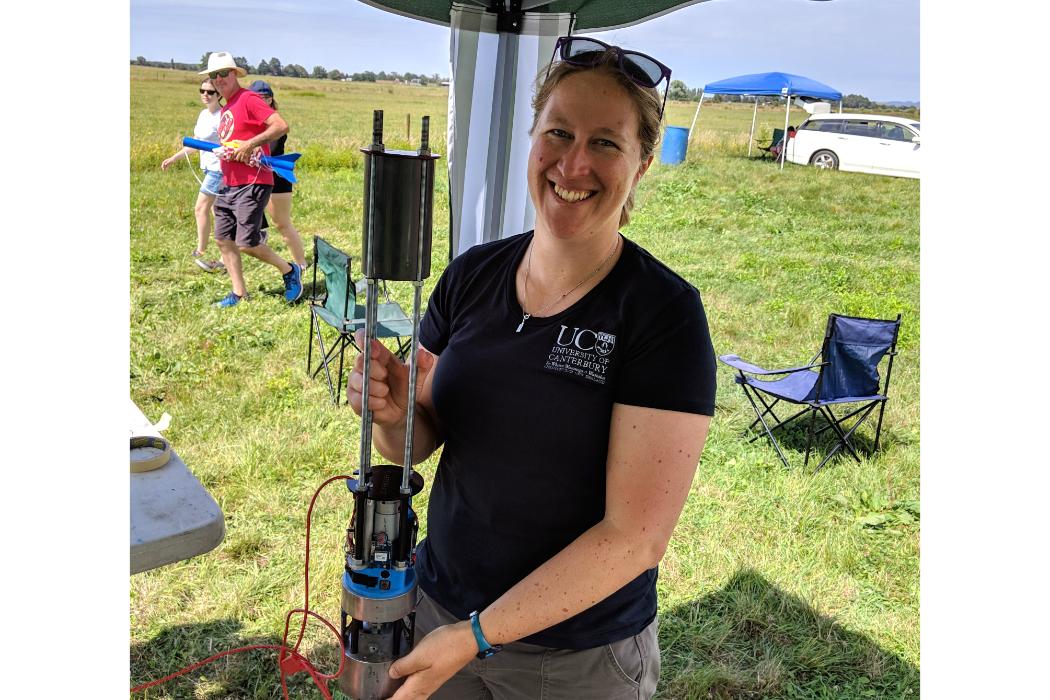 University of Canterbury biochemist and space enthusiast Dr Sarah Kessans with the biological payload for Into the Blue.

Earlier this month, a rocket blasted off from the Waikato countryside, firing up through the clouds to an altitude of 31,000 feet – carrying with it the first biological experiments launched and recovered from a rocket in New Zealand.

The rocket, Into the Blue, was designed and built by a team of University of Canterbury students from the UC Aerospace Club, including Matthew Furkert, Jack Davies, Robbie Grove and Thomas Bell.

Boasting cutting-edge technology in the form of an active air-braking system and real-time data transmission, Into the Blue will be entered in the Australasian Universities Rocket Competition to be held in Queensland, 17-21 April.

For the first time, held in the rocket’s payload bay was a chassis (fabricated by technical officer Ben McGinlay of UC Biological Sciences) containing two biological experiments featuring both plant and microbial cultures. The aim of this payload was to test the feasibility of biological/biochemical experiments on domestic rocket launches, says UC biochemistry researcher Dr Sarah Kessans, herself a NASA astronaut candidate finalist interviewee.

For the inaugural launch, two experiments were trialled, one including cell cultures (in solid nutrient media) of Pinus radiata, in collaboration with biotechnologist UC Associate Professor David Leung of UC Biological Sciences.

“As we progress from these initial feasibility studies, culturing wood-forming Pinus radiata cells in low Earth orbit will give us an understanding of cell physiology in microgravity, leading to the future in situ production of building materials on the moon and Mars,” Dr Kessans says.

The second experiment, in collaboration with Canterbury brewers Damien Treacher and Mark Waller of the appropriately named brewpub The Laboratory, Saccharomyces cerevisiae was flown as part of the payload to determine the effects of rocket flight on the microbial production of valuable secondary metabolites during the fermentation process.

“The initial launch was a great success, with many lessons learned which will help us to optimise biological payloads on subsequent rocket launches,” says Dr Kessans.

The experiments were well received by both rocket enthusiasts and members of the public. The National Launch Day attracted hundreds of spectators, several of whom were students now interested in pursuing astrobiology, she says.

“We look forward to integrating additional experiments into the next launches.”

If you would like to get involved with future biological/biochemical payloads, please get in touch with Dr Sarah Kessans (sarah.kessans@canterbury.ac.nz ).