A new book, Rising from the Rubble: A health system’s extraordinary response to the Canterbury earthquakes, reveals untold stories of courage, compassion and creativity. 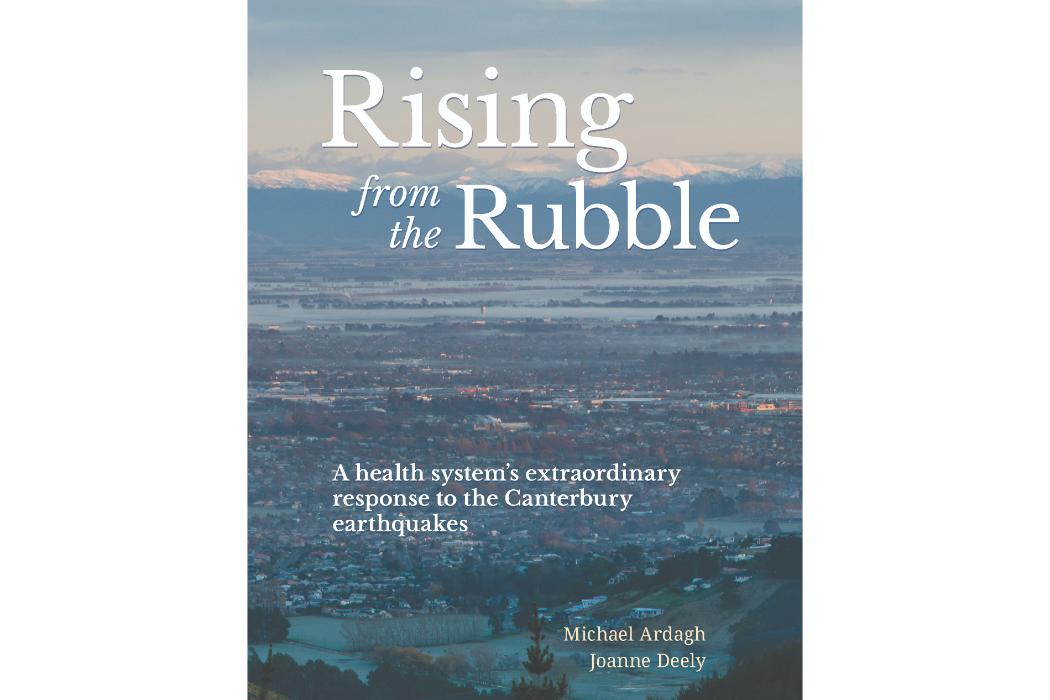 Rising from the Rubble gives a compelling account of staff working in the Canterbury health system who rallied to maintain and rebuild essential health services through the Canterbury earthquakes.

A new book, Rising from the Rubble: A health system’s extraordinary response to the Canterbury earthquakes, reveals untold stories of courage, compassion and creativity.

Based on interviews with those who lived and worked through the Canterbury earthquakes, Rising from the Rubble is co-authored by Dr Michael Ardagh and Dr Joanne Deely and published by Canterbury University Press. It gives a compelling account of staff working in the Canterbury health system who rallied to maintain and rebuild essential health services, ensuring continuity of care for the most vulnerable as well as managing the significant increased demand for services to support the ongoing impact on the mental health and wellbeing of Cantabrians.

Dr Ardagh says he and Dr Deely felt there was a lack of information about the enormous role played by people in health during and after the earthquakes and that it was vital to record the experiences of patients and staff.

“We wanted to capture their stories in a book that would be accessible to the general public as well as to health staff.”

While it is not intended as a scientific publication, providing instead a selection of very personal perspectives, he says there were also many important lessons to share in regard to emergency planning, procedure and practice. Health care providers in New Zealand and overseas would find it valuable.

Stories about the immediate disaster aftermath include accounts of emergency medical teams successfully managing a huge influx of patients, blood bank (transfusion services) staff maintaining uninterrupted service despite working intermittently by torchlight and also ankle-deep in water, and the maintenance and engineering staff striving to keep the hospital functioning despite the ravaged infrastructure.

“Most people would have run for the hills rather than stay underneath a concrete building. It was typical that staff chose not to flee, but to fight – to stay at, or even return to, work.”

Dr Ardagh says that in addition to maintaining continuity of care in extraordinary circumstances, staff had to treat patients in compromised environments, such as damaged homes, and those working in health services also had their own battles with earthquake damage, insurance and post-traumatic stress disorder.

Key themes include innovation borne of necessity, with novel solutions to logistical nightmares required in the aftermath of the disaster, and the effectiveness of collaboration and communication between health providers, including primary, community and hospital care.

“Their ability to respond to the 2011 quake was a direct result of the health system’s transformation into an integrated health system, and they had also done effective planning for ‘major incidents’, such as devising a multi-agency plan to cope with a pandemic,” says Dr Ardagh.

Joanne Deely (PhD, BSc, GDipTeach, GDID, MRSNZ) is an independent scientist and professional science writer. She researches and writes for the Canterbury District Health Board and for New Zealand universities.

Extracts from the book:

“We were running out and we were hit by a wave of people running into the building! They were all staff.” – a business consultant on site at Princess Margaret Hospital on 22 February 2011. (p67)

“I remember we got a call from the ED [emergency department] – we had to get some flood lighting set up around the carpark because … there were helicopters landing in the street and they were using that carpark as a triage area. It was amazing really what they were doing … And when I went back to talk to the ED charge nurse, it was bedlam, but all the staff … they were all just calm. It was just really professional.”
– Alan Bavis, Facilities and Engineering Manager, Canterbury DHB. (p100)

“Luckily, that night, one of the engineers had his diesel Toyota Land Cruiser on site. He decided he would sort this problem there and then so that these crucial [electrical] services could function. He drove his vehicle to the generators and siphoned enough diesel from the Land Cruiser’s fuel tank to prime the pumps.” (p101)

#Philanthropy@UC A young woman who cared about people and held a strong sense of social justice has created a powerful legacy for Social Work students ...