A new study about New Zealand’s extinct moa, involving acid baths and concrete mixers, by researchers from the University of Canterbury and Landcare Research, has revealed a surprising finding about their ability to disperse tree seeds. 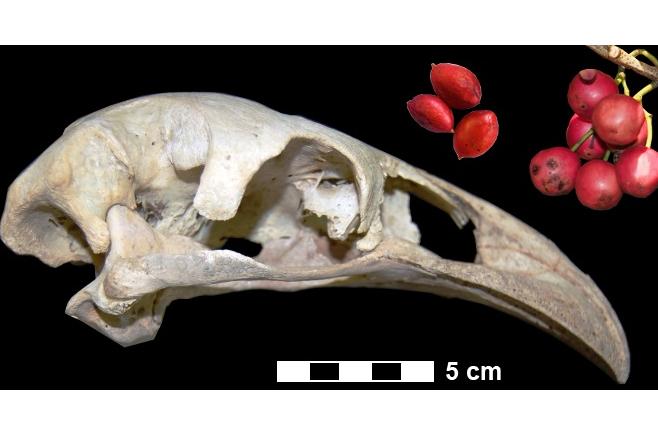 South Island Giant Moa skull, and two of the fruits originally hypothesised to have been dispersed by moa: miro and pūriri.

A new study about New Zealand’s extinct moa, involving acid baths and concrete mixers, by researchers from the University of Canterbury and Landcare Research, has revealed a surprising finding about their ability to disperse tree seeds.

For decades it had been assumed that New Zealand’s largest native fruits evolved to be eaten and spread about prehistoric landscapes by the large extinct moa. The new study, published today (18 April) in the prestigious Proceedings of the Royal Society of London, casts doubt on this theory.

By examining the seeds found in 23 preserved moa gizzard samples, and 152 ancient moa droppings, the authors have shown that although moa consumed some of New Zealand’s largest fruits (up to 15mm diameter), their muscular, stone-filled gizzards pulverised all but the tiniest of seeds. Only seeds less than 3mm diameter were found in the droppings and were therefore capable of being dispersed by moa.

Lead author, University of Canterbury (UC) Ecology PhD student Jo Carpenter says that part of the reason people had assumed that moa dispersed the large seeds – such as from miro, mataī, hinau, pōkākā, and pūriri trees – was due to the thick seedcoats, potentially requiring severe abrasion (as would have occurred in the stone-filled gizzards of moa) for rapid germination.

“These seeds seem poorly adapted for dispersal by birds that are alive today,” Carpenter says. “We were amazed to find that even silvereyes, which are one of New Zealand’s smallest fruit-eating birds, can disperse seeds significantly larger than the giant moa were dispersing.”

To confirm their suspicions, the researchers subjected miro and hinau seeds to a simulated passage through a moa gut, by tumbling the seeds in a stone-filled concrete mixer followed by bathing in a warm, weak acid bath. They found that this treatment did not actually increase the speed of germination as had long been suspected. In fact, the seeds still took between two and seven years to germinate.

“On the face of it moa seemed the perfect candidate for having dispersed these large seeds, but the evidence shows this didn’t actually happen. It just goes to show how cautious we need to be when assuming anything about extinct species,” co-author Jamie Wood from Landcare Research says.

UC Ecology Professor Dave Kelly, Carpenter’s doctoral supervisor and paper co-author, says: “It appears the loss of moa may have had more of an impact on small-seeded plants, like some herbs which are now endangered”.

“A key reason for knowing which seeds moa dispersed is so that we can understand whether the extinction of the moa has created gaps in contemporary seed dispersal networks that we should be concerned about,” he says.

Although the study revealed that moa extinction has left little in the way of a gap in seed dispersal services today, Carpenter suggests that: “our focus should now fall back on how native New Zealand plants are faring with reduced populations and range sizes of surviving seed dispersers”.

Janet Wilmshurst of Landcare Research and University of Auckland, another co-author of the study, summed up the wider relevance of the findings.

“As ecologists, we typically assume that large, extinct herbivores were important dispersers for large seeds. However, our study completely contradicts those assumptions by showing that New Zealand’s largest herbivores actually destroyed large seeds,” she says.

“This highlights the importance of considering multiple sources of fossil data when investigating the ecological roles of extinct fauna, rather than simply relying on plausible assumptions.”