A team of University of Canterbury students has won an innovation award for a creative solution to a real world problem in the Engineers Without Borders Australia Challenge. 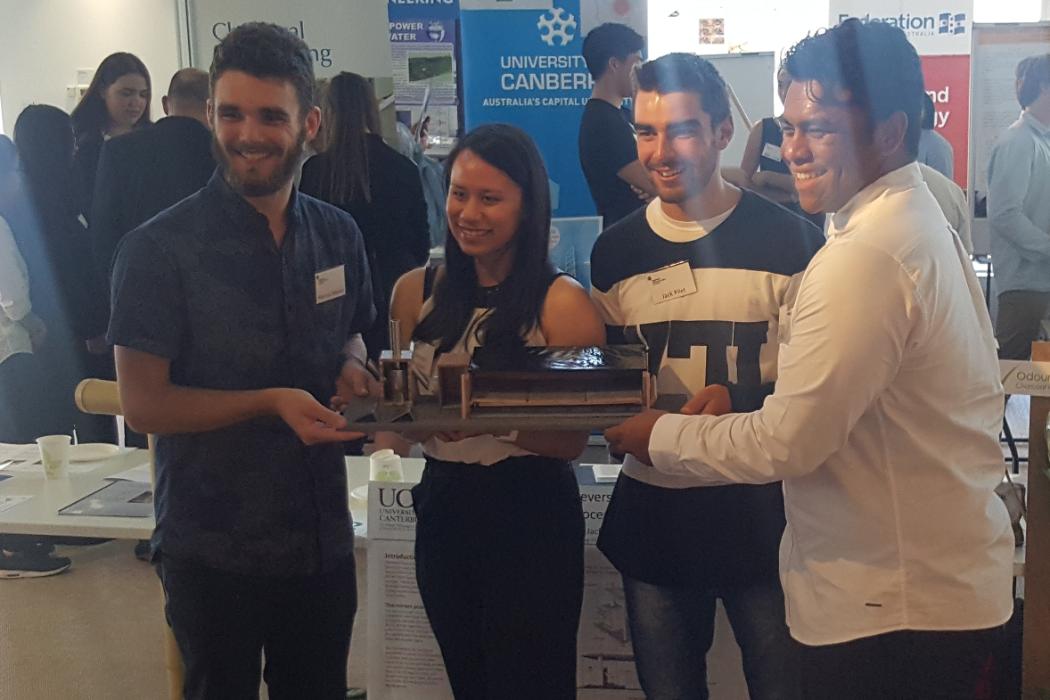 A team of University of Canterbury students has won an innovation award for a creative solution to a real world problem in the Engineers Without Borders Australia Challenge.

Four University of Canterbury Engineering students recently returned from Melbourne, Australia, where they won the inaugural Podesta Family Enterprise and Innovation Award in the Engineering Without Borders (EWB) Challenge. Their winning design was for a coconut meat (copra) drying device for use in Vanuatu.

When four students, David Avei, Jack Pilet, Odyssey Posimani and Marcus Reeves, met in their first-year Engineering class, little did they know they would soon collaborate to make an internationally recognised humanitarian design.

David Avei says they were excited to attend the event and to present their copra-drying device.

The 2017 EWB Challenge in partnership with the Live & Learn Environment Education in Vanuatu, set the task to investigate an efficient and effective method for copra production.

The group developed a reversible air-flow drier that uses a solar-powered fan for air circulation. The required heat is generated from renewable resources. The design allows the reversal of the air-flow which would reduce the drying time significant and increase the produce quality, David explains.

“When coconuts are dried out the kernel left behind (also known as copra), can be used in products like soap, shampoo and in some foods. As the major source of income for many families, it is key that the drying process is consistent. One of the problems with the current design was it took three days.”

Sometimes it stopped people paying for their needs and school because of the time taken to harvest and process, he says.

For inspiration, the team looked to models of rice driers from Southeast Asia where there are similar environmental factors.

“We wanted it to be familiar rather than something new. Where the previous models have inconsistency of heat, it resulted in some burnt copra, so we have tried to improve that.”

The team were supported by UC Engineering academic Dr Alfred Herritsch who travelled with the team to Australia, and UC Engineering technician Graham Mitchell, who helped build the model.

Dr Herritsch says the team spirit and energy made it a joy to support the students at the EWB event, but it was also an opportunity for the students to hear from recent graduates.

“They told stories about what they have been working on as humanitarian engineers, which can be a different point of view; one was a journalist telling stories of the positive impact engineers can have on people’s lives, to encourage more people to pursue engineering as a way to change lives,” Dr Herritsch says.

The team’s win affirms there are more opportunities to explore, and David says he is excited to see where this goes.

“I understood the impact of design having been to Samoa, but I had no idea our design could actually happen, let alone might be something that can exist across the Pacific,” David says.

See David explain the team’s design in a video here.