A team of four Mechanical Engineering students from the University of Canterbury's has won a national engineering prize, the Ray Meyer Medal for Excellence in Student Design. 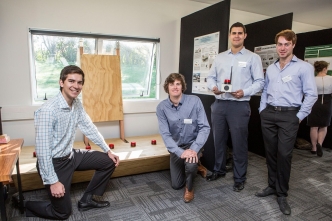 From left to right: Abel Leenders, Thomas Coughlan, Mo Chalabi, and Josh Heenan have won the Ray Meyer Medal for Excellence in Student Design for 2016, the 10th time a University of Canterbury team has won the award in the last 12 years.

A team of four Engineering students from the University of Canterbury has won a national engineering prize, the Ray Meyer Medal for Excellence in Student Design.

This win means that Mechanical Engineering students at UC have won the excellence award 10 times in the last 12 years, an emphatic endorsement for the top College of Engineering in New Zealand.

The award is made annually for the best student engineering project from all New Zealand universities and polytechnics and was presented to the winning University of Canterbury team at the IPENZ Fellows and Achievers Dinner on Friday, 18 March, in Wellington.

Trimble, in association with Fulton Hogan, was looking for an answer to the problem of road milling machines hitting buried utility infrastructure, damaging the machine and the infrastructure, as well as creating a hazard for the operator. Within a budget of $1800, the UC student team built a prototype using very low frequency radio waves (VLF) technology which can detect metal up to 25cm-deep in the ground. It was installed on a Fulton Hogan milling machine and tested successfully.

No other system exists that utilises multiple metal detection units on a pavement milling machine. The design is now being considered for commercial development.

The winning team’s academic project supervisor Dr Rodgers, who is the University of Canterbury Student Association’s Lecturer of the Year 2015, praised the team’s efforts.

“We are all excited about the win, it is a great recognition of the work the students did and a great reflection on UC,” Dr Rodgers says.

“It also reflects the strength of the final-year project programme and the strong connection it creates with industry. Great outcomes can be achieved when students can work directly with an industrial mentor such as Ian Viney and a company such as Trimble.”

The students have now graduated with one working in France and another currently on an internship for Trimble.