UC students are taking the fast-track to top-level motorsport careers, with graduates being chosen to design, test and build what could be the world's fastest track car. 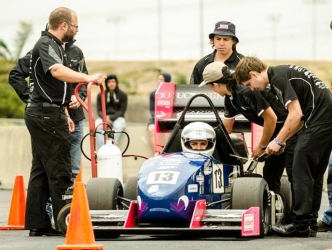 University of Canterbury students are taking the fast-track to top-level motorsport careers, with graduates being chosen to design, test and build what could be the world's fastest track car.

Since launching in 2013, University of Canterbury Motorsport (UCM) has seen a number of its students race into professional automotive and motorsport engineering careers around the world.

Most recently, UCM students were offered job interviews by professional motorsport teams in Australia following UCM’s success in the Formula SAE competition, but there are also opportunities in New Zealand and globally.

UC Faculty Advisor to the UCM team Bruce Robertson says that two UC graduates are working for Jaguar Cars in the United Kingdom, another is working for motorsport consultancy Optimum G in the United States, and now three have begun working with Rodin Cars in Waiau. He also notes recent job interview offers from Red Bull Racing, Nismo (Nissan Motorsport), and FPR (Ford Performance Racing) in Australia for members of the UCM team.

“It’s a great success for us that this UC programme is creating such amazing opportunities for our students,” says Robertson, who is also the Design Engineer and Technical Services Manager in UC’s Department of Mechanical Engineering.

This year, UCM students will be making use of the advanced manufacturing capability at the Rodin Cars facility near Waiau, as well as receiving significant financial sponsorship from its Australian owner, David Dicker, to support the strong ambitions of UCM in the Formula SAE competition, Robertson says.

“The organisation that has started up in Waiau is quite unique in the world, and we are very lucky to have it on our doorstep. The owner is driven by a pure passion for the fastest cars in the world and has the dream, along with the financial ability, to build a car which is the fastest. He has tapped into the pool of talent which we are generating and nurturing at UC, which is a win-win for both parties.”