Student numbers at the University of Canterbury have increased for the 2016 academic year due to a rise in both domestic and international enrolments. 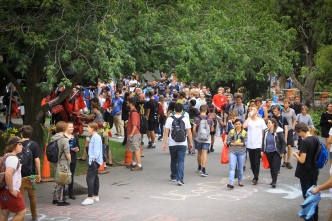 The University of Canterbury campus is booming, a reflection of the increase in applications to attend UC in 2016.

Student numbers at the University of Canterbury have increased for the 2016 academic year due to a rise in both domestic and international enrolments.

New-to-UC enrolments are up 13 per cent when compared to the same time last year – an additional 380 new students, bringing the number of new students at UC to 3,242 equivalent full-time students (EFTS), compared to 2,862 new EFTS last year.

UC Vice-Chancellor Dr Rod Carr had predicted an upswing in 2016 enrolments and is pleased with the result.

“It’s still three weeks before the final day students can withdraw from courses, but when compared to the same time last year, overall enrolment figures are tracking up more than two per cent domestically and around 39 per cent for international fee-paying students.”

“We also have record numbers of postgraduate students. In 2010, we had about 750 full-time equivalent students in Masters programmes. In 2015 we had more than 1,020 full-time equivalent students in Masters programmes and record numbers of PhD students. We have 1,045 individual doctoral candidates, an increase of 17 per cent on 2010 levels.”

Dr Carr says the University has made a significant commitment to attract and retain students and that a post-quake trend of local students leaving town to attend University elsewhere seemed to have diminished.

“I’m delighted with the number of new students enrolled this year. This shows that local students are less inclined to leave town. In 2014, they wanted to leave Christchurch and went to Wellington, Otago and into the workforce. Now we’re retaining Christchurch school leavers and we’re getting our fair share of provincial students, as well as attracting greater numbers from the Auckland region.”

Dr Carr notes that flatting in Auckland can be particularly hard on a student budget and lifestyle.

“Living on or near the UC campus, and having a lifestyle that can take you from lectures to skifields in 90 minutes or the beach in 20 minutes, is much more appealing and affordable than living in Auckland.

“The increase in enrolments is due to the hard work of a lot of people to rebuild student numbers and spread the word about UC’s academic quality and the excellence of UC’s research-led teaching and learning. Twenty-one disciplines taught at UC are ranked in the top 200 in the world and UC is one of the top three universities in New Zealand,” Dr Carr says.

“It is fair to say that the recovery is accelerating year on year.”