From shaving the eye of a bee to zombie cockroaches, UC Adjunct Professor Simon Pollard has spent the last year advising Te Papa and Weta Workshop on a new science exhibition. 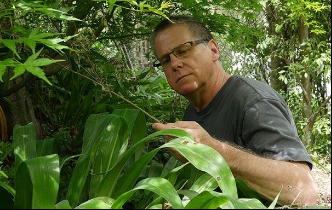 From shaving the eye of a bee to zombie cockroaches, University of Canterbury Adjunct Professor Simon Pollard has spent the last year advising Te Papa and Weta Workshop on the new science exhibition, Bug Lab.

From shaving the eye of a bee to zombie cockroaches, University of Canterbury Adjunct Professor Simon Pollard has spent the last year advising Te Papa and Weta Workshop on the new science exhibition, Bug Lab.

As the main external science advisor to Te Papa and Weta Workshop for Bug Lab, Dr Pollard has been spending two days a week in Wellington for almost a year working on the $5 million exhibition.

“I used my background as a scientist and science communicator to help develop bug stories that were beyond your imagination and could be realised as models by Weta Workshop and told by the team at Te Papa.

“For all of the different projects I have been involved in as a scientist, writer, photographer and documentary advisor, this just pushed all my buttons. I could not have wished for a better project and feel very privileged to have worked with such a talented team at Te Papa and Weta Workshop,” Dr Pollard says.

Visitors enter four immersive chambers, including the ‘operating theatre’ of the iridescent female jewel wasp to watch her turn a cockroach into a zombie on which her larva feeds. She is the devoted mother and killer brain surgeon of the bug world.

“Who couldn’t admire a wasp which injects a cocktail of venom into specific parts of a cockroach brain to turn it into a zombie, so it could be food and a nursery for the wasp's larva?”

The interactive exhibition, which took 40,000 hours to create, is open until 17 April 2017 (Easter Monday). After showing at Te Papa for the next five months, Bug Lab will tour the world.

The collaboration between Te Papa and Weta Workshop is unique in the museum world, Dr Pollard says.

“Where else would you find a Hollywood-level special effects company working with a small country's national museum?

“Weta worked very hard to make sure the bug models were as accurate as possible. For the model of Japanese honey bees defending themselves against a Japanese hornet, the hairs on the bees were inserted individually. Honey bees have hairy eyes and Weta shaved the eye of a dead bee to see how the hairs should be inserted into the eye.”

Dr Pollard has written a book, The Genius of Bugs (Te Papa Press), which showcases stories told in the exhibit as well as other bug stories. The book has been included in The NZ Listener’s list of top kid's books for 2016.

Dr Pollard was also the advisor for a spider sequence on the recent BBC Attenborough series, The Hunt. He spent three weeks in Singapore working on the sequence and said the final clip was “an astonishing achievement by a visionary producer and one of the best macro-cameramen in the world”.

When an edited version of the clip was shown on Facebook, just before the series came out in Britain, it was viewed more than 10 million times.

Next year, Dr Pollard will be working with Te Papa Press on a new book project and plans to give a UC Connect public lecture on telling the difference between science and pseudoscience.