Dr Sarah Kessans, a postdoctoral fellow at the University of Canterbury, is in the top 1% of applicants shortlisted by NASA to become an astronaut. 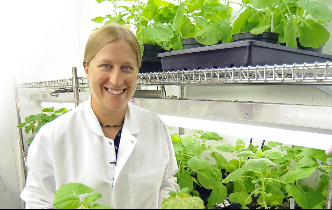 Aspiring astronaut and University of Canterbury Chemistry academic Dr Sarah Kessans is one step closer to fulfilling a cosmic dream. She applied to be a NASA astronaut back in February and recently made the next cut for NASA's Astronaut Candidate Class of 2017.

Dr Sarah Kessans, a postdoctoral fellow at the University of Canterbury, is in the top 1% of applicants shortlisted by NASA to become an astronaut.

Aspiring astronaut and University of Canterbury (UC) Chemistry academic Dr Kessans is one step closer to fulfilling her dream. She applied to be a NASA astronaut back in February and recently made the next cut for NASA's Astronaut Candidate Class of 2017.

Dr Kessans is one of about 120 invited to Houston, Texas, United States, for initial interviews later this month. From there, 50 applicants will be invited for finalist interviews, after which eight to 14 will be chosen as NASA's 22nd Astronaut Candidate Class, reporting for duty in August 2017.

Dr Kessans has already had plenty of adventure in her 33 years on the planet, including spending 16 hours clinging to a capsized rowboat in the Atlantic Ocean during a 3000-mile race in 2006 and then coming back to set a world record for rowing across the Atlantic in 2008.

We talked to Dr Kessans about her next astronomical adventure:

Why did you apply to be a NASA astronaut?

While I consider myself to be a scientist/educator first and foremost, exploration, adventure, and team sports have always been huge parts of my life. I absolutely love my current position and the research that I'm getting to perform here at UC, but becoming a NASA astronaut would combine all of my many passions into one incredibly fulfilling, inspiring career.

Like many kids, I dreamed of being an astronaut when I was younger, but I never thought it would be an actual, viable career choice for me. When a friend posted NASA's Astronaut Candidate Programme selection announcement on Facebook late last year, I realised that I not only met the minimum requirements (US citizenship, bachelor's degree in a STEM field, plus three years of professional experience and 20/20 vision), but also possessed many of the traits and experiences that NASA was looking for in the next astronaut class.

My heart rate jumped up pretty high just contemplating the opportunity of getting to perform cutting edge science while serving my country in one of the most incredible ways possible, so I started the application right then and there while eating my brekkie.

How do you feel about being invited to NASA for an interview?

I am completely honoured and humbled to have been invited for the initial interview. Though, I will admit, once I got off the phone with the Astronaut Selection Office when they invited me for an interview, I did jump around the office with enough passion that the postgrads in the next office over questioned if there had been earthquake!

The whole process thus far has been an incredible journey - from applying and just dreaming of going to space, to making it through to the Highly Qualified pool (top 450 applicants) and rehashing adventures with old teammates and advisors who had been contacted by NASA as referees, and now getting the opportunity to go to Houston to meet current astronauts, tour the Johnson Space Center, and learn more about the current programme and the future of space travel ... it is quite surreal.

What process do you go through to get in?

Right now, I am in the top <1% of the initial applicants (120 of 18,300) who will go to Houston for three days of interviews in groups of 10 between now and early November.

From what I've gathered from past selection rounds, we'll be given psychological and medical tests during the interview process, but mostly the selection panel will be looking to see if we're suited for the programme (ie. if the members of the current Astronaut Corps would be able to live and get along with us for 6 months or longer in a tin can hurtling through the vacuum of space at 17,500 miles an hour). Therefore, the most frequent bit of advice I've gotten from those associated with the programme is “just be yourself”.

After NASA has interviewed us all, they will narrow the field down to approximately 50 finalists, who will then go through another week of more rigorous tests (currently scheduled for January - April 2017). In June 2017, NASA will then choose 8 to 14 of these finalists to become the Astronaut Candidate Class of 2017, who will report for duty starting in August 2017.

Right now, I'm trying to learn as much as I possibly can about the programme and the current Corps, and I'm trying to stay relaxed enough to just enjoy the ride. It would be the most amazing dream come true to be chosen as one of the lucky 8 to 14, but so far the journey has been the reward, with the support and inspiration of such an incredible community (especially from UC) surrounding me and cheering me on.

Dr Kessans earned her PhD in 2011 from Arizona State University, where she worked to develop a plant-based vaccine against HIV.

Arriving  in  New  Zealand  in  2012,  she  has  spent  the  last  few  years  in  UC's  School  of Biological  Sciences  with  Renwick  Dobson,  gaining  biochemistry  experience  in  enzyme evolution and characterisation.

Last August, she returned to her molecular biology roots, working in a team in Professor Emily Parker’s research group to  develop  fungal  factories  for  biosynthesis  of  high  value  industrial  bioproducts  for commercial applications.

Outside  of  the  lab,  Dr Kessans can  be  found  kayaking  down rivers,  biking  in  the mountains, running  around  ultimate  frisbee  pitches,  and  generally  exploring  New Zealand’s natural wonders.