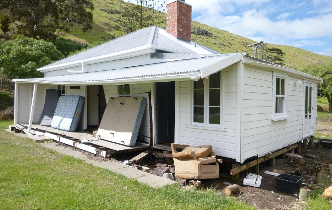 The Little Pigeon Bay Cottage sustained damage during the tsunami on Monday 14 November 2016 demonstrating the severity of the wave that struck. Photo credit: James H. Williams, University of Canterbury

Following the ongoing earthquake sequence in North Canterbury that began at 12.02am on Monday 14 November, there is confirmation of tsunami occurring along the Canterbury coastline, impacting Kaikoura, Pegasus Bay and Banks Peninsula.

South of Kaikoura, damage from this event appears, at this stage, to be highly localised to one residence at Little Pigeon Bay, where inundation occurred up to 140 metres inland, and which damaged a single unoccupied dwelling. Other observations made by members of the public in the early hours of Monday morning indicate tsunami making landfall across other coastal areas, including Sumner, Redcliffs, Port Levy and Pigeon Bay, where some level of inundation has occurred, although without obvious damage.

These observations reinforce that tsunami evacuations on Monday morning were well justified and members of the public who did self-evacuate from the coastal suburbs, following the initial prolonged earthquake shaking and in response to subsequent warnings, are to be commended for their actions.

Tsunami propagation can be very complex and this event has shown that although a tsunami may not seriously affect an area where evacuations occurred, other areas may well be impacted.

Given the likelihood of ongoing aftershocks, the potential for future tsunami exists. Therefore people may have to evacuate ten times without any inundation, just to make sure they are safe, because it may be difficult to pick the one time that will cause damage. Evacuation is always encouraged following any serious or prolonged ground shaking felt at the coast, and people should heed the message “long or strong, be gone”.

Public evacuation declarations, including tsunami siren alarms, should also be heeded to minimise harm to communities and responding emergency services.