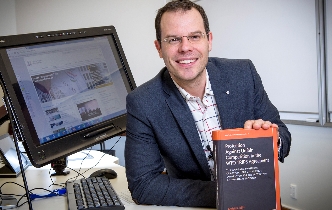 Dr Christian Riffel has devoted a new book to what he says is a compelling aspect of international law - unfair competition, what international protections exist and the enforcement role of the World Trade Organisation.

As the scope of international trade law continues to expand, so too does the work of trade lawyers who must now add ‘unfair competition’ to their list of concerns.

Dr Christian Riffel (UC Law) has devoted a new book to what he says is a compelling aspect of international law. The book, ‘Protection against Unfair Competition in the WTO TRIPS Agreement — The Scope and Prospects of Article 10bis of the Paris Convention for the Protection of Industrial Property’, was recently published as part of a prestigious international series — World Trade Institute Advanced Studies — on international economic law. On the institute’s editorial board are leading trade lawyers from Switzerland, Germany and Canada.

While writing the book, Dr Riffel was also invited to speak on the subject of protection against unfair competition at the inaugural symposium of the Global Economic Law Network, held at the University of Melbourne in 2014.

“It was a huge honour to attend that symposium and to talk about this. There were Australian lawyers there representing the Australian government who had questions they wanted to ask relating to their country’s tobacco plain packaging legislation.”

After this legislation was introduced in Australia in 2011, it became embroiled in WTO trade disputes. Complainants alleged breaches of both the WTO TRIPS Agreement and unfair competition rules. In his book, Dr Riffel investigates whether the WTO has the mandate to enforce fair trading practices in such cases and argues that it does (though whether the tobacco plain packaging legislation is actually in breach of the rules is a separate matter).

“The problem in international law is always ‘how to enforce the rules’. By incorporating extant fair trading rules into the framework of the World Trade Organisation, they can be enforced through the highly effective enforcement mechanism of the WTO, namely through the suspension of trade concessions.”

The book also makes a case that, as part of their WTO obligation to ensure ‘effective protection against unfair competition’, states are obligated to guarantee core labour standards.

“The question is, what is the legal status of those standards for WTO members — are they obliged to comply? I am saying ‘yes’. Can any member bring a case in the event of non-compliance? Again, I think the answer has to be ‘yes’.”