Leading the way in next-generation virtual reality and motion capture technology, the HIT Lab NZ at UC is a founding site for the Crytek VR First initiative. 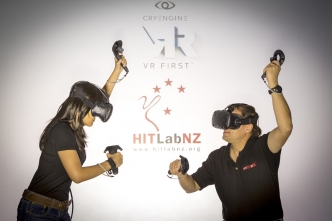 Leading the way in next-generation virtual reality and motion capture technology, the Human-Interface Technology Lab (HIT Lab NZ) at the University of Canterbury (UC) has been named a founding site for the Crytek VR First initiative.

UC’s HIT Lab NZ is the only institution in the Southern Hemisphere Crytek has selected for the initiative. The HIT Lab NZ and UC students will access leading virtual reality (VR) technology, including VR headsets from HTC, Sony, Samsung and Open Source VR. Motion-capture systems from Leap Motion, HTC and other manufacturers will also be available as part of the agreement.

Student developers and artists will have access to the incredibly realistic and robust Cryengine platform to roll out their next-generation immersive experiences. The HIT Lab NZ will provide space for the work to be done and foster a creative vibe among the participants, says UC Professor Rob Lindeman, Research Leader of the HIT Lab NZ.

“We are so psyched to be part of this initial wave of the VR First initiative,” Prof Lindeman says.

“It allows us to combine our 20+ years of VR research with the leading providers of tools for realistic VR. There is so much call for people who really understand how to work with this new technology, and we are primed to educate the next generation of VR experience designers.”

More broadly, the VR First initiative at the HIT Lab NZ will embrace the creative community in Christchurch by providing access to the equipment to those outside UC to foster more collaboration between the University and Christchurch gaming communities.

“There is such a vibrant creative community in Christchurch. We hope that this initiative can help bring more focus to the region, and make it a destination for those wishing to be a part of creating engaging virtual experiences with impact,” Prof Lindeman says.

Established in 2003, the HIT Lab NZ focuses on supporting people in their everyday lives, at work, school, and play, through the application of human understanding and cutting-edge technology for virtual reality, augmented reality, gaming and human-robot interaction. The HIT Lab NZ offers Masters and PhD programmes in Human Interface Technology. Much of the work done at the HIT Lab is sponsored by local, national and international companies and organizations who tap into the HIT Lab’s expertise in advanced technology user experience design to help solve real world problems.

Established in 1999, Crytek has created multiple award-winning titles, including the original Far Cry, the Crysis series, Ryse: Son of Rome, and Warface.

For more information on the Crytek VR First initiative: www.cryengine.com/vrfirst