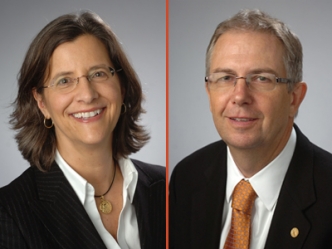 Syracuse University professors Suzanne Baldwin and Paul Fitzgerald will be teaching and researching Earth sciences in Christchurch for the next three months, where there is “a great awareness of the active role that geology and tectonics plays in people’s lives”, Professor Baldwin says.

Syracuse University (SU) has a long-time relationship with the University of Canterbury (UC), including scientists from each institution making trips across the globe for research visits, as well as working in Antarctica together.  The professors, who are recipients of a prestigious UC Erskine Fellowship, say the fellowship will afford new opportunities.

“It’s a real honour to be invited to come to Canterbury on an Erskine fellowship,” says Baldwin.

While on fellowship, Baldwin and Fitzgerald will give lectures at the University and to the public on their areas of expertise. They will speak on research they’ve conducted across the globe, including work in Alaska, Papua New Guinea and Antarctica. Because Christchurch is the gateway for the majority of research expeditions to Antarctica, this area is of particular interest to local scientists.

While Fitzgerald and Baldwin often study Earth processes operative on the timescales of millions, or even billions of years, New Zealand offers a refreshing change of pace. The country straddles the Australian-Pacific tectonic plate boundary, which is marked by the active Alpine Fault in the South Island, as evidenced by ongoing mountain building and earthquakes.

“The active tectonics are in your face, so to speak, and that in and of itself makes it a very dynamic and exciting place to conduct research,” Baldwin says.

She also acknowledges that being in a geologically active location has very real consequences for the local population.

“Christchurch city has suffered tremendously from the earthquakes that occurred in 2010 and 2011. There is a great awareness of the active role that geology and tectonics plays in people’s lives, as well as global phenomena such as climate change.”

The researchers will also be participating in the first year of a new study abroad programme, Frontiers Abroad, for SU undergraduates. Fitzgerald and Baldwin, working with SU Abroad and faculty from UC, set up the program in 2013 and 2014. The 2016 programme is the first time that SU students will be able to actively participate.

Four SU students will travel to New Zealand to participate in the Frontiers Abroad program.  The semester abroad includes a five-week field camp where students gain hands-on experience with fieldwork at different research sites across the country. SU Abroad students will be based at the seaward Kaikoura mountain range for a week during their field experience. Additionally, the students will complete a semester at UC where they will take classes and do research based on their field studies.

John Angus Erskine, the benefactor whose gift enabled the Erskine Fellowship programme since 1963, has a serendipitous connection to Central New York. Though Erskine lived primarily in New Zealand and attended what is now the University of Canterbury, he also spent a year working at the General Electric (GE) plant in Schenectady, in the state of New York — just a two-hour drive from Syracuse. It is likewise fitting that Fitzgerald uses a research technique, fission track thermochronology, which was first developed at the same GE plant.

Baldwin and Fitzgerald are excited by the opportunities the Erskine Fellowship will afford them. In addition to bolstering research relationships with UC scientists, the fellowship enables the two professors to spend time focusing on research.

“You need to have a research leave to recharge your battery, reinvigorate your mind and engage in discussions with other scientists globally,” Baldwin explains.

Fitzgerald adds, “I’m looking forward to being able to devote myself to science, working on a variety of research projects including writing a book on low-temperature thermochronology with colleague Marco Malusa from Italy.”