Hunting the elusive neutrino in Antarctica

In today's UC Connect public lecture, academic Jenni Adams will discuss the huge IceCube detector, a neutrino detector made from a cubic kilometre of Antarctic ice. 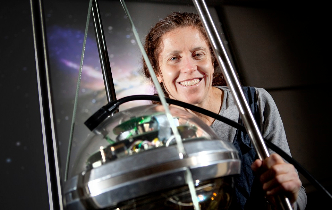 In the final UC Connect public lecture for 2016, academic Jenni Adams will discuss the huge IceCube detector, a neutrino detector made from a cubic kilometre of Antarctic ice.

Every second of every hour of every day, 100 trillion neutrinos pass through the tip of your thumb – in fact through every square centimetre of your body. These neutrinos are streaming out of the centre of the sun. Star stuff streams through you.

Somewhere out in space, neutrinos, with a million times more energy, are being produced. By detecting them we can learn about some of the most energetic and violent regions of our Universe.

However, due to their ghostly ability to pass through matter with ease, neutrinos are tricky particles to detect. Though it is rare, neutrinos do interact sometimes, and when they do light is produced which can be detected and analysed to reveal the neutrino’s properties. To catch a neutrino a giant detector is needed to counter the neutrino’s very small interaction property.

In this UC Connect public talk, University of Canterbury Physics and Astronomy Associate Professor Jenni Adams, will describe the huge IceCube detector, a neutrino detector made from a cubic kilometre of Antarctic ice, and the exciting astrophysics which IceCube reveals.

At the IceCube experiment in Antarctica, Assoc Prof Adams and her colleagues use the mountain-sized telescope, made up of more than 5000 sensors, to detect the elusive particle. These sensors are embedded deep in the ice at the South Pole to enable detection of neutrinos, which are nearly massless subatomic particles.

When not researching our Universe, Assoc Prof Adams may be found orienteering in some far off corner of the globe.

Register to attend at: www.canterbury.ac.nz/ucconnect