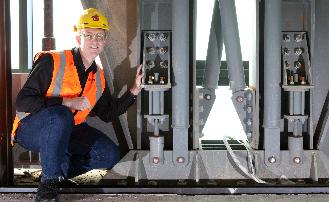 Buildings that bear the brunt of extreme force, such as the earthquakes that hit Christchurch, could be reoccupied much sooner if Dr Geoffrey Rodgers' new structural engineering solutions are adopted.

Building solutions that challenge conventional construction wisdom are being researched, modelled and tested by University of Canterbury academic Dr Geoffrey Rodgers as he re-examines what defines a ‘strong’ building.

Buildings that bear the brunt of extreme force, such as the earthquakes that hit Christchurch, could be reoccupied much sooner if his new structural engineering solutions are adopted. Good vibrations, it turns out, are the key to getting back to business.

This research aims to enable the design of resilient buildings that respond in a damage-resistant manner. Far fewer buildings would be demolished and could be repaired more cost effectively. This will allow rapid re-occupancy and reduce downtime after a severe seismic event.

For Dr Rodgers, who lectures and researches in the University of Canterbury’s (UC) Mechanical Engineering department, success looks like “a suite of energy dissipating solutions that can support a range of building design methodologies”.

Ultimately, it includes cost-efficient ‘smart intervention’ which will appeal to investors, developers, the building industry and the insurance sector.

Conventional wisdom, which is embedded in building codes worldwide, is that we allow damage to occur in selected areas to prevent collapse, and that after a large earthquake we can expect to find damaged structures.

To date, it has been common practice for the horizontal beams to limit the force they carry by becoming damaged, restricting the force transmitted to the vertical columns so that the columns remain undamaged. This sacrificial damage approach ensures that collapse is prevented, protecting the lives of building occupants.

But as the Canterbury earthquakes and aftershocks proved, it is this damage that contributed hugely to one of the most prolonged challenges continuing to face local industry, commerce and service providers – timely reoccupation of buildings became a distant dream for many.

Dr Rodgers, who gained his PhD in 2009, was part of the team that developed the design solutions for Forté Health’s new building in Kilmore Street, Christchurch, introducing lead extrusion dampers at the building’s base. Instead of the energy transmitted by an earthquake encountering a structure which absorbed the force by becoming damaged, the dampers are designed to dissipate energy without damage.

UCSA lecturer of the year in 2015, Dr Rodgers next focused on designing systems for controlled rocking connection.

“If you’re a boxer, you don’t stand up hard against the punch, you roll back in a controlled way.

“It takes a lot of energy to cause damage. But if you take away the ability to absorb energy through damage, then you have to provide something else.

“Regardless of the medium or device which is used – tension-only braces, viscous fluid devices, lead extrusion dampers – what remains constant is the need to dissipate energy and do so in a damage-resistant way.”

Ultimately the combination of these devices with sensors which measure motion and monitor how buildings perform in the real world will give additional insight and provide the confidence to guide reoccupation.

There are a series of challenges, according to Dr Rodgers.

“Complacency builds surprisingly quickly following events like the Canterbury earthquakes. There is a significant increase in uptake of the research. However, the margins around cost quickly tighten.

“It’s important to remember, most of the time you are in a car you won’t crash, but the one time that you do, you want to be wearing your safety belt.

“Then, if consultants don’t fully understand new technology, and they’re not comfortable with it we don’t get very far. The answer is to provide robust modelling from testing the devices as they are developed and to show building experts how it relates to or impacts on the way the Building Code is written.”