Beyond lie detectors: 'The brain does not lie'

What if we had the technology to read your mind? UC's Law School is leading a project to investigate the forensic potential of brain scanning technology. 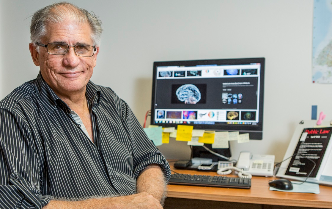 What if we had the technology to read your mind? The University of Canterbury’s Law School is leading a New Zealand Law Foundation funded project to investigate the forensic potential of brain scanning technology.

Imagine if police officers were able to scan the minds of suspects to find out whether they had critical knowledge relating to a serious crime; being able to read brainwaves could revolutionise the way crimes are solved.

In fact, such technology already exists, but has yet to gain widespread acceptance.

The potential efficacy of this relatively new forensic tool, known as Forensic Brain Scan Analysis (FBSA), is being explored this year by the UC Law School Te Kura Ture, in conjunction with the Brain Research Institute, Christchurch, and partners at Otago and Massey universities.

Called ‘The Brain Does Not Lie: an investigation into the scientific validity and legal application of Forensic Brain Scan Analysis’, the project will explore brain-scanning technology pioneered in the United States by Professor Lawrence Farwell.

The technology uses electroencephalography (EEG) to measure brainwave responses, combined with additional features in a so-called MERMER test (memory and encoding related multifaceted electroencephalographic response). It involves a subject being fitted with a headband containing electronic sensors that detect brainwaves. They are then shown various stimuli on a computer monitor, including words, phrases, diagrams, pictures or photographs that randomly test for recognition of three types of information (irrelevant, target and probe).

Project leader Professor Robin Palmer, who is UC’s Director of Clinical Legal Studies, says FBSA had much more potential as a forensic tool than traditional lie detectors, or polygraphs.

“This is not a lie detector, it is a knowledge detector. If this science checks out, and it has a high accuracy rate for reading brainwave response to stimuli, then it could provide effective proof of knowledge.

The project had been discussed in meetings with police representatives who had expressed their support and cooperation.

If verified, FBSA could be used not just for crime investigation, but also in civil litigation, employment disputes and other ancillary applications.

“UC is an innovation leader engaged with the community and this project reflects that. If we can make crime detection more accurate and resolve employment disputes more easily, it helps everybody.”

The Brain Does Not Lie project will begin with an investigation of the procedures developed for FBSA, with Palmer leading a team to Seattle in June to meet Professor Farwell. Also on the team for the fact finding trip will be Adjunct Professor Richard Jones, whose academic expertise spans the fields of Electrical and Computing Engineering, Communication Disorders, Psychology, Medicine, Biomedical Engineering and Neuro-technology.

“Our starting point is to see if the science behind this is verifiably reliable.”

The next step will be to replicate the MERMER test through a pilot programme, scheduled for December.