'Babysitting services wanted' read the Press ad in 1968 placed by young mother Susan Wauchop, who had enrolled at UC determined to complete her Bachelor of Arts degree. 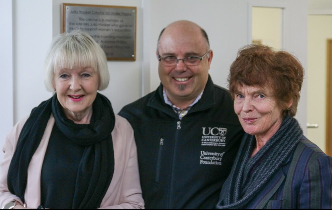 Wynnis Armour (left) and Susan Wauchop were founders of the first childcare on campus at the University of Canterbury nearly 50 years ago, pictured here at the opening of the Ilam Early Learning Centre, with UC Alumni and Development consultant Avan Polo, who helped find all the women involved. The founders are named on the special plaque behind them.

‘Babysitting services wanted’ was the advertisement placed in The Press in 1968 by young mother Susan Wauchop, who had enrolled at the University of Canterbury determined to complete her Bachelor of Arts degree. Back then there were no campus childcare facilities and the idea of such a service was considered fairly radical.

Three other young mums with hopes of completing higher education responded to her advert. As the scheme grew, room for a nursery (as it was called) was found at the University of Canterbury Students’ Association (UCSA) headquarters, despite some objections to ‘noisy children and useless mothers’ on campus. Supervising the children was Mrs JM Hooker, whose support for women’s education was so strong that she accepted an effectively unpaid position in order to help young mothers study.

How Susan Wauchop’s advert led to the formation of the university’s, and possibly New Zealand’s, first on-campus crèche was a remarkable achievement, recorded at the time in an article published in the New Zealand Women’s Weekly in July 1968, but since then largely forgotten.

Zoom forward 48 years to a meeting of UC alumni in Auckland. Wynnis Armour, one of the original crèche founders, shared the story of how it all began with UC Alumni and Development consultant Avan Polo. Inspired, Mr Polo began sleuthing and soon tracked down the other founders, as well as Mrs Hooker’s son, now an academic in Australia, Professor Barry Hooker.

They were invited as guests of honour to attend the re-opening of the Ilam Early Learning Centre, in August, at which the late Mrs Hooker’s considerable contribution was recognised.

The centre’s under-threes area is now known as the Julia Hooker Crèche. At the opening, a special plaque was unveiled carrying a dedication to Mrs Hooker, ‘who gave so much to support women’s education’. The plaque also names all four crèche founders: Wynnis Armour, Laurelle Martin, Aubynne Phillips and Susan Wauchop.

Entrepreneur and business director Ms Armour, along with the other original founders, was delighted that Mrs Hooker’s generous service to women has been acknowledged. A benefactor of the centre, Ms Armour spoke at the opening.

“No-one knew her by her first name – she was always Mrs Hooker to us. She was amazing. She had such a strong belief in women’s education and taught us all so much,” said Ms Armour, who in 1968 was a young student with a 16-month-old son.

Ms Wauchop, who also attended the opening, says great strides have been made in early childhood education in 48 years.

“What a fabulous place this is,” Ms Wauchop said of the Ilam Early Learning Centre. “As a psychologist, I know quality early childhood education is associated with long-term health and wellbeing.”

While unable to attend the centre’s opening in person, Professor Barry Hooker expressed warm thanks for the acknowledgement of his mother’s work. He and his wife, Professor Virginia Hooker, were represented at the ceremony by nieces and nephews of Mrs Hooker.

The centre’s relocation to the Dovedale campus was necessitated by the UCSA building’s demolition near its original site on UC’s Ilam campus. UCSA chief executive Dave Hawkey says the new centre has a more spacious under-threes area and is now licensed for up to 65 children.

“It’s hard to imagine a time when services like this didn’t exist. The centre is really important, particularly for our postgraduate students,” Mr Hawkey says.