Two University of Canterbury composers are among the winners of the inaugural NZTrio Composing Competition 2015: Celebrating Lilburn. 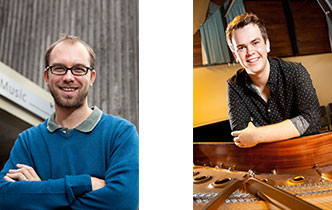 The original work of UC students Alex van den Broek (left) and Matthew Everingham will be performed in two Douglas Lilburn tribute concerts by the NZTrio.

Two University of Canterbury composers are among the winners of the inaugural NZTrio Composing Competition 2015: Celebrating Lilburn.

Alex van den Broek’s composition, View from Mt Peel, and Matthew Everingham’s piece, A Search for a Language, will be performed in two concerts by the NZTrio along with eight other original works by New Zealand composers.

Together with composer Kenneth Young, the leading New Zealand music ensemble, NZTrio, selected the winners based on the strength and originality of the scores, as well as considering how authentically and meaningfully each composer responded to the brief to “write a new work for Piano Trio that references, or responds to, Douglas Lilburn's life and work”.

Currently studying composition at UC, Everingham said that he was lucky to have this amazing opportunity: “I’m looking forward to having my piece, 'A Search for a Language', performed in the NZTrio’s Douglas Lilburn tribute concerts in Auckland and Wellington.”

Alex van den Broek, who has a Master's degree in Music with Distinction from UC School of Music, said it was an honour to have his work ‘View From Mt Peel’ selected . “I am proud to represent the School of Music, along with fellow student Matthew Everingham, as part of this exciting initiative”, he said.

“Lilburn was a student at the University of Canterbury and had a huge role in the history of the School of Music.  I am privileged to walk in his footsteps, not only here at UC, but in the wider Canterbury landscape. My work is inspired by a visit to Mt. Peel, as is Lilburn's work ‘Forest’.”

NZTrio is performing these original works in the Winners’ Concerts on 9 Oct in Auckland and 10 Oct in Wellington.

UC PACE intern, Paige Newnham-Shaw supported the Christ Church Cathedral Reinstatement Project from February to May this year by helping them tap into ...