UC engineering student Scott Spooner's entry in the prestigious 'C-Prize UAV Challenge' has been recognised as the most innovative entry across New Zealand. 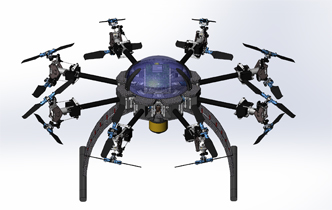 University of Canterbury (UC) engineering student Scott Spooner’s entry in the prestigious ‘C-Prize UAV Challenge’ has been recognised as the most innovative entry across New Zealand.

Finalists were announced today in the 2015 Callaghan Innovation C-PRIZE competition, which was centred on developing next generation Unmanned Aerial Vehicle (UAV) technology for the screen industry.

UAVS are commonly referred to as drones, but there was nothing common about Scott’s ‘Vecta16’ entry, which received a bonus prize for innovation. His entry developed technology to allow a UAV to accurately hold its hover position and altitude in the highest-speed turbulent wind flow.

“It can do this while maintaining any desired orientation, including flying on its side, or completely inverted. The ability to provide thrust in any 3D direction means the craft can instantly counteract wind and turbulent air. The Vecta16 is not required to tilt during forward flight, so can fly at high top speeds while being perfectly level,” says Scott.

Originally from Whanganui, Scott has been studying at UC for four years where he is in the final year of completing a Bachelor of Engineering with Honours in Mechatronics.

Kelvin says Scott is an accomplished competitive model aircraft pilot of multi-rotor craft – experience that is sure to have come in useful when developing his competition entry.

Scott is currently second placed of 600 members in RotorcrossNZ – New Zealand’s multi-rotor racing league  –  and is grateful to his sponsors Xhover and KDE Direct, who help make it possible for him to travel to compete in races throughout the country.

Scott is also on the Council of Model Flying NZ and is a multi-rotor Wings badge instructor and examiner - taking people for their competency licence to fly remote-controlled multi-rotor aircraft.

For displaying the highest degree of innovation, Scott won an Aeronavics UAV (including a GoPro camera, gimbal, wireless video down link, mission controller and transport case). The prize is a great boost for Scott, who plans to make a career in commercial UAV research and development.

Commercial use of UAVs is growing and film directors are increasingly using unmanned aircraft to tell their stories and capture new perspectives in mobile videography. The C-PRIZE challenge aimed to address specific screen industry challenges and advance the commercialisation of innovative technology.

“A developing culture of innovation and entrepreneurship at UC is helping to build our reputation for doing useful things – useful for businesses, communities and environments,” said Dr Woodward.

“The Civil Aviation Authority chose to launch its UAV rule changes on UC’s campus this week, and we regularly host industry members, end users and government representatives from across New Zealand at our monthly UAV Forums.”

Dr Woodward says establishing a UAV ‘swarm intelligence’ lab, as a joint initiative between numerous departments within Engineering, is another example of how the University supports collaboration and innovation.  This lab will support world class research into how multiple UAVs, called a ‘swarm’, can work collaboratively to complete complex tasks, and requires a multi-disciplinary approach including advances in wireless communications, computer vision, embedded systems, control systems, artificial intelligence and networking.

UC’s Spatial Engineering Research Centre and Wireless Research Centre have been involved in research work and augmentation of UAVs since 2006, and have become internationally recognised in the field of UAVs. SERC is an executive committee member of UAV New Zealand and was a member of the project working group established to update the new rulings announced this week. Canterbury is also the only university in New Zealand, and one of very few in the world, that has approval for a segregated airspace UAV flight test area.