The first doctorate degree connected to the Ngāi Tahu Research Centre has been awarded to an academic who is continuing a multi-generational legacy of Maori success. 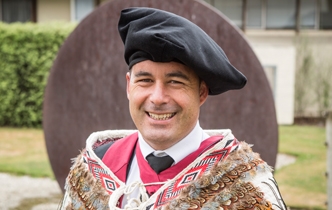 Dr Eruera Prendergast-Tarena has completed his PhD in Management, Marketing and Entrepreneurship with his research supported by a Ngāi Tahu Research Centre Doctoral Scholarship and a Fulbright Award.

The first doctorate degree connected to the Ngāi Tahu Research Centre has been awarded to an academic who is continuing a multi-generational legacy of Maori success.

His research investigated the corporate design of contemporary indigenous organisations, including conducting case studies into Kamehameha Schools of Hawai‘i, the Sealaska Corporation of Alaska, both in the United States, and the iwi corporation Te Rūnanga o Ngāi Tahu in New Zealand.

Continuing a family legacy of academic achievement, Dr Prendergast-Tarena, who is named after his renowned great-grandfather Eruera Stirling, tells of another legacy he has inherited.

“Two weeks before I graduated I met [award-winning writer and anthropologist] Dame Anne Salmond who had a very close relationship with my great-grandparents Eruera and Amiria Stirling [respected Maori elders who collaborated with Dame Anne on three award-winning books].  Eruera had received an honorary doctorate and my family had gifted his academic bonnet to Dame Anne at his tangi in Raukokore.  When she heard I was graduating she gave me my great-grandfather’s bonnet.

“I was very proud to wear his bonnet on my graduation day and recognise the legacy he left for his descendants as well as my grandfather, Waha Stirling, who also received an honorary doctorate from Lincoln University.  Three of my four grandparents are doctors so I have been fortunate to have that legacy in my whānau,” Dr Prendergast-Tarena says.

“With the help of the Ngāi Tahu Research Centre scholarship, I have been able to help build upon that legacy, as have all of my cousins who have succeeded in a range of fields and trades.  It’s also great to see such an amazing cohort of young Māori scholars coming through the scholarship programme.  I know they will also create their own legacy of Māori success for their whānau.”

Dr Prendergast-Tarena’s principal supervisor, Associate Professor Venkataraman Nilakant from UC’s College of Business and Law, describes working with him as a pleasure.

“He was an ideal student. He did not have any background in management when he started his thesis. I gave him a set of difficult books to read on organisation design and theory. I wasn't sure how he would cope with complex ideas in organisation theory without the background. He astounded me by mastering the material in a few weeks. He was probably more knowledgeable about organisation theory than most of our Commerce students.

“A doctorate was a great leap for Eru. I was privileged to be there with him, supporting him in his journey. Watching him complete his thesis and achieve the highest qualification at UC has been one of the most satisfying moments in my life.”

The NTRC was established in 2011 as a joint initiative between Ngāi Tahu and the University of Canterbury, to lead indigenous scholarship and to provide a centre for the intellectual capital and development of Ngāi Tahu, the principal Māori iwi of the southern region of New Zealand.