A book celebrating 100 years of the iconic Canterbury Workers' Educational Association (CWEA) has been released by Canterbury University Press. 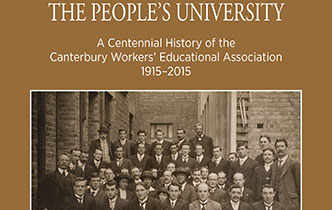 A book celebrating 100 years of the iconic Canterbury Workers’ Educational Association (CWEA) has been released by Canterbury University Press.

Since the CWEA was formed in Christchurch in 1915, with the aim of providing university-level education to working men and women, it has enriched, and at times even transformed, the lives of thousands of everyday Cantabrians.

The People’s University: A Centennial History of the Canterbury Workers’ Educational Association 1915-2015, written by widely published historian Ian Dougherty, explores the colourful history of this pioneering organisation, and tells the story of the enthusiastic and committed involvement of students, tutors, volunteers and staff.

It retraces the beginnings of the CWEA in a rented room in a former warehouse on Hereford Street, through its innovative travelling library and box schemes, which enabled it to reach rural participants, to the present day where it continues to hold more than 130 courses each year, including general adult education, recreational classes and clubs, and lectures and seminars dealing with social, economic and political issues.

“The People’s University is the first comprehensive published history not only of the Canterbury Workers’ Educational Association but of any regional adult education organisation in New Zealand,” Ian said.

“Readers will gain an insight into the history and development of adult education
in New Zealand and of the social history of Canterbury.”

John Sullivan, CWEA Centennial History Project Committee member, said the book is a tribute to an exceptional organisation, and to the women and men who have shaped it over the past century.

“Despite its small size, the CWEA and the people who have been associated with it have made many important contributions to adult and community education and democratic citizenship in Canterbury and Aotearoa,” John said.

“We believe this book, which focuses on the impact of the WEA on its participants, will appeal not only to friends of WEAs and other adult educators around the world but will also be of interest to members of the public and social historians.”

Ian Dougherty is a journalist and historian. He has a Master of Arts degree in history from the University of Otago, a Diploma in Journalism from the University of Canterbury and a Teachers’ College Diploma from the former Christchurch Teachers’ College. He has worked as a print and broadcasting journalist and professional historian for nearly four decades. The author of more than 20 books on New Zealand history, biography and culture, he has a special interest in the history of education and has written several histories of New Zealand polytechnics and institutes of technology.