UC is publicly displaying New Zealand's oldest copy of the Magna Carta for the first time, just as its connection with King Henry VIII and Anne Boleyn has been discovered. 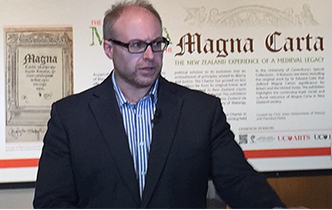 The University of Canterbury is publicly displaying New Zealand’s oldest copy of the Magna Carta for the first time, just as its connection with King Henry VIII and Anne Boleyn has been discovered.

UC holds in its archives the oldest copy of the Magna Carta in New Zealand, a lawyer’s reference copy printed in 1532. The Mana of the Magna Carta: The New Zealand Experience of a Medieval Legacy exhibition (1 – 6 December) is the first time it will be on public display.

Lead curator and UC historian Dr Chris Jones discovered last month that the UC copy was originally owned by Richard Sampson, who was effectively King Henry VIII’s divorce lawyer, when in 1536 he acted as the king's proctor against Anne Boleyn. Last month, Dr Jones, working with a team of researchers, discovered that the inscription on the title page reads: “Rycharde Sampson dothe owne me”.

“I can tell you exactly when he bought it because he wasn't a bishop at the time and he became one in 1536, so he's the original owner or he had it within four years of it being printed. At the time it was the latest, up-to-date guide to English law, and Sampson would have had it in his hand when he acted in Anne Boleyn’s trial.”

Dr Jones says the Magna Carta was a milestone in establishing the Rule of Law in western society.

“On its 800th anniversary, this exhibition explores the origins of the Great Charter, its links to the University of Canterbury, guardian of our country’s oldest copy, and its relevance in modern bicultural Aotearoa New Zealand.”

“UC is marking the 800th anniversary of the Magna Carta not simply by looking to the past, but by seeking to explore what the Charter can tell us about our future as a nation,” Dr Jones says.

UC’s copy of Magna Carta is nearly 500 years old. Due to its fragility, access is usually restricted to academics who may only view it with good reason and supervision. This is a rare opportunity for the public to view one of this country’s most significant constitutional treasures.

Curated by Dr Jones (History, UC College of Arts) and UC student Thandiwe Parker, the exhibition is sponsored by UC’s College of Arts and School of Law, as well as an external partner, Magna Carta 800 NZ.  The exhibition coincides with the New Zealand Historical Association conference at UC, which brings together academics from across Arts and Law with the GLAM (galleries, libraries, archives and museums) sector and the wider public.

The Mana of the Magna Carta: The New Zealand Experience of a Medieval Legacy exhibition, 1 - 6 December 2015, is being held in the Matariki building gallery, University of Canterbury, Ilam, Christchurch, to celebrate the 800th anniversary of the sealing of Magna Carta.