A University of Canterbury researcher has received $345,000 in Marsden funding to investigate the primary deficit in stuttering. 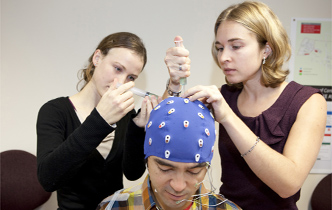 A University of Canterbury researcher has received $345,000 in Marsden funding to investigate the primary deficit in stuttering, which she hopes will pave the way for developing new treatments for stuttering.

Dr Catherine Theys (Communication Disorders and New Zealand Institute of Language, Brain and Behaviour) will lead a research team to look into the causes of stuttering which affects one in 20 children. For a significant proportion, the disorder persists into adulthood, leading to well-known vocational and social challenges, such as fear of speaking.

Dr Theys says unfortunately, for the more than 33,000 adult New Zealanders who suffer from stuttering, no cure or permanent treatment exists for their speech problems.

"The ability to communicate effectively is vital to a person’s health and well-being. For most people, speaking is an effortless process. For those who stutter it can be a daily struggle.

"After centuries of research, the cause of stuttering remains unknown; hence there is still no cure. While popular theories have related the origin of stuttering with psychological problems, recent studies have shown differences in brain function between those who stutter and fluent speakers, indicating a neural cause.

"We do not know if these differences in brain function are the key components of the long searched for cause of stuttering or represent the neural changes due to many years of compensating for stuttering.

"This study intends to unravel these questions on stuttering and for the first time, it aims to determine in which areas of the brain and in which sequence differences in neural processing occur between people who stutter and fluent speakers. From this information, we aim to develop a neuro-computational model capable of simulating the neural and behavioural characteristics of stuttering.’’

"Adults with persistent developmental stuttering and fluent speakers will perform speech production tasks, which will allow us to detect location and timing differences in brain activation in people who stutter compared to fluent speakers,’’ Dr Theys says.