University of Canterbury researchers will continue experimenting over summer to find exciting new functions for their first life-sized humanoid robot whose components. 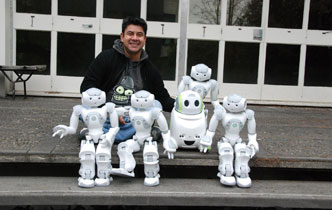 University of Canterbury researchers will continue experimenting over summer to find exciting new functions for their first life-sized humanoid robot whose components have been created using a 3D printer.

The robot, called InMoov, can be replicated on any 3D printer. While it only has a torso, it can talk, move in complex ways, recognise voices and has several in-built cameras. The benefit of 3D printing is the convenient and affordable cost of prototyping.

Experiments and research activities with the robot are being carried out at UC’s HIT Lab NZ, headed by Professor Mark Billinghurst and Associate Professor Christoph Bartneck. HIT Lab PhD student Eduardo Sandoval says the 3D printer is producing the parts of the robot.

"The amazing thing is that 3D printers have become very affordable and anyone can three-dimensionally print their own robot.

"We will be working on this project and with other robots throughout 2014. It is an exciting new field to be involved in,’’ Sandoval says.

One of the Government’s 10 National Scientific Challenges announced this year included robotic development.

Some New Zealand companies are developing industrial robots. However, research in social robotics is a great chance for New Zealand to develop an export industry, Sandoval says.

"We will soon see personal robots that could help assist elderly people living alone, or taking care of children and offering information in public places. Japan is the world leader in this area and they are developing robots for their domestic market.

"Researchers at UC can offer their expertise to industry and work together to create a totally new industry with the obvious benefit to the New Zealand public.

"One of the first steps is for UC’s HIT Lab researchers to study the psychological, sociological and linguistic aspects of the human robot interaction,’’ Sandoval says.

Sandoval, who has recently been honoured by the National University of Mexico with the medal Alfonso Caso, says UC researchers will continue over summer making videos showing the amazing capabilities of the HIT Lab robots.

Last year, the HIT Lab created a video with six robots dancing Gangnam style that went viral and is the most viewed video created at UC with more of 336,000 views on YouTube.  See: http://youtu.be/51vQo-imc4Q

Sandoval says their work with the the InMoov humanoid robot is useful for interaction experiments.

"One of the main factors in our study of robots is researching the degree of human features that the robots display. People react in different ways according to these factors. Once our InMoov robot is finished we will have more tools to develop and experiment with.

"Robotics is a hot topic these days. Robots have helped people in many areas, including dangerous situations performing precise tasks in different fields.

"However, the sci-fi style robots coming that purport to help in the home as personal assistants are not too far off become reality at this point. In the next five to 10 years we will start to see robots in our homes, offices and schools.’’